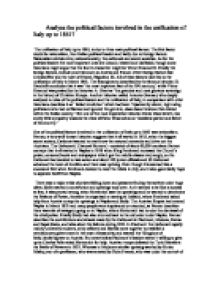 Analyse the political factors involved in the unification of Italy up to 1861? The unification of Italy up to 1861, is due to three main political factors. The first factor would be nationalism, then Italian political leaders and lastly due to foreign factors. Nationalism divides into; national society, the carbonari and secret societies. As for the political leaders the most important ones are Cavour, Mazini and Garibaldi, though some historians might argue that the fourth charachter might be Victor Emanuel II. Finally the foreign factors, include countries such as Austria and France. Other foreign factors like CrimeanWar and the ruler of France, Napoleon III. All of these factors have led to the unification of Italy in March 1861. The Risorgimento described by the famous historian D. Zanchelli concludes that it was 'the most important fact of the 19th century,' while Victor Emanuel was praised by the historian A. Orani as 'the grandest and most glorious sovereign in the history of Christian Europe. Another historian called Antonio Gramsci, who deeply analysed to roles of the political leaders and the unification of Italy, in comparison with other historians describes it as ' failed revolution' which had been 'hijacked by clever, right-wing politicians who had outflanked and ignored the genuine, class-based tensions that existed within the Italian soicety.' But one of the most imperative historian Denis Mack Smith, has surely little sympathy towards the view ofVictor Emanuel as an 'idealistic patriot and father of his country.' One of the political factors involved in the unification of Italy up to 1861 was nationalism. Farmer, a very well-known historian suggests that it all started in 1815, when the biggest secret society, Carbonari wanted to overthrow the restored monarchs and drive out the Austrians. The Carbonari ( Charcoal Burners ) consisted of about 60,000 members.Farmer conveys that it all started in Naples in 1818 when King Ferdinand increased the Church's power, censored books and newspapers which got the middle-classes very angry, so the Carbonari had decided to take action and about 100 junior officials and 30 Carbonari advanced the town of Avellino and there was uprising. ...read more.

All these projects had raised the debts of Piedmont from 120 to 725 million lire to Austria, claims Morris. By 1860 Piedmont had an 800km of rail track, whereas according to Morris this track was 819 km long, and Italy's first locomotives were built in the same year. Morris says that by the end of 1850's Piedmont had trebled it's value of trade and was first place in Italy. When Mazzini thought that Italy should be unified without the help on its own Cavour believed that this could not be done without foreign help. Simpson and Jones agree to Cavour and think that the failures of 1830's and 1848 made it clear that a united Italy wouldn't happen unaided. This is where the foreign powers come in but I will talk about this in the last part, as the third factor contributin to the unification of Italy. Cavour was a really significant character as he made good relationships between the great powers and especially Napoleon III and as he gained Lombardy and Tuscany was given to Piedmont. For Farmer the last most important character who helped the unification of Italy was Giuseppe Garibaldi. Farmer describes him as 'educated, impetuous, charismatic, and first and foremost a soldier, he was very different from the wily Cavour.' Simpson and Jones say that he was 'attracted by Mazzini's ideas when he met him at Marseilles in 1832,' where he was involved in a plot against Charles Abert in 1834. Simpson and Jones claims that Garibaldi's and Mazzini's ideals were quite similar but Garibaldi differed from him in two different ways: he had no time for the Church and he was readier to accept foreign intervention more than Mazzini. Simpson and Jones believe that it was Garibaldi's magnetism which made him so strong and loved by everyone. Farmer believed that he was a power on his own and most of his achievements was made by himself by no help from external factors, such as foreign countries nor from Cavour. ...read more.

In March 1861 Italy was unified, but Venetia and Rome were still under the Austrian rule, which became unified later on. Lastly to conclude, the cost of this unity was 50 million lire in 186 which rose to a further 250 million lire in 1859. Even though some historians ( Simpson and Jones ) think that Victor Emanuel was the 4th character which had a huge role in the unification of Italy, George Meredith an English poet wrote a poem to the creation of Italy mentioning, ' the three : Cavour, Mazzini, Garibaldi.' I believe that the most important factors why Italy became unified in March 1861, was due to all of the three factors, without the secret societies and uprisings in the 1830's Mazzini wouldn't have thought of a unified Italy, without Mazzini, Garibaldi would've never joined the revolts and uprisings in Italy and therefore he wouldn'nt be 'attracted' by Mazzini's thoughts. Without Mazzini's thought maybe Cavour wouldn't be so powerful and thought of an expansion Piedmont, even though he hated Mazzini, I believe that he got courage from his ideas, and from the conclusion point : Unification of Italy, he tried to achieve that ambition with different strategies. Also like Garibaldi, he believed in the same abition as Mazzini, and as he was the 'pen' where he released his ideas to everyone, Garibaldi was the 'sword' who got his ideas into action. Mazzini was more of a 'thinker' rather than a 'doer' even though he was very well known for some of his revolts, his strategies weren't as powerful as Cavour's and Garibaldi's. On the other hand without Cavour, Piedmont would never have had the help of foreign powers, people would still try to make uprisings in the states of Italy, which would be surpressed by Austria over again. Just like in the 1830's how it happened repeatedly, over and over again. So all of the three factors complete eachother, 3 factors all make one, and one Italy. One unification. ...read more.