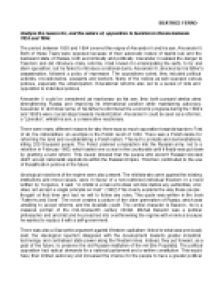 Analyse the reason for, and the nature of, opposition to tsardom in Russia between 1855 and 1894.

﻿BEATRICE FERRO Analyse the reason for, and the nature of, opposition to tsardom in Russia between 1855 and 1894. The period between 1855 and 1894 covered the reigns of Alexander II and his son, Alexander III. Both of these Tsars were opposed because of their autocratic nature of tsarist rule and the backward state of Russia, both economically and politically. Alexander II realised the danger to Tsardom and did introduce many reforms, most known for emancipating the serfs, to try and stem opposition, but he failed to introduce a national duma. Alexander III, shocked by his father's assassination, followed a policy of repression. The oppositions varied, they included political activists, revolutionaries, peasants and workers. Many of the nobles as well opposed various policies, especially the emancipation. Educational reforms also led to a series of riots and opposition to individual policies. Alexander II could be considered as reactionary as his son, they both pursued similar aims: strengthening Russia and improving its international position while maintaining autocracy. Alexander III did follow some of his father's reforms but the economic progress during the 1880's and 1890's were crucial steps towards modernization. Alexander II could be seen as a reformer, a ?Liberator?, whilst his son, a conservative reactionary. There were many different reasons for why there was so much opposition towards tsardom. First of all, the nationalities: an example is the Polish revolt of 1863. ...read more.

However, this had little success, the peasants either did not accept, or did not understand, the revolutionary message being sent to them. In despair, some turned to terrorism, as they thought it was the only way in achieving their aims. In 1897, a group called ?People's Will? was founded with the intention of murdering members of the major powers, the ruling class. This group had no more than 400 members and was responsible for tha assassination of Alexander II in 1881. However, this act of violence did not strenght the movement, but instead, weakened the movement. The importance of this group was not the ideas, but the method it was using. Its concept of using peasants to start a revolt seemed unrealistic. The peasantry were highly distrustful as they very conservative, religious and illiterate. This movement although gave an example to all the revolutionaries of the late nineteenth century, they were influenced and if not inspired, by them challenging Tsardom. The nobility also had a reason for opposing tsardom; this included the Emancipation of the serfs. They wouldn't accept their loss of a third of their land; though they were compensated for this, much of it went off to pay debts. Nobles were also against the fact that they had now also lost their great social influence and prestige. Their financial and social status depended on the serfs and therefore opposed the idea of losing their wealth in favour of the peasants. ...read more.

These opposition groups were although significant as they encouraged opposition against the Tsar for later revolutionaries. They also managed to make the later oppositions question themselves about how effective the revolutions were, and if not how they should improve. Such as: if the peasants were ready for a revolt, if political violence should be used againsts the state and who should be leading the revolution. Clearly, such considerations had an impact on Lenin and the Bolsheviks. The nature of the oppositions were secretive, which meant that the revolutionary oppositions could not mobilise peasant discontent which was the greatest threat to stability. There was a lack of political tradition in Russia which meant that the opposition's thinking tended to be utiopian in character rather that following the realities of how a state should be governed. There was no clear or united groups in the oppositions, but instead very different, and often conflicting, thoughts of ?what is to be done?. The conservative interests were too strong, even if the nobility were angry with Alexander II and III, they still weren't going to support the revolutionaries against him. The people might have been successful in killing Alexander II in 1881, but this surely did not lead to a greater reform or revolution. Instead, it strengthened the ways to put down opposition, as it was seen in the harsh treatment against the revolutionaries during the reighn of Alexander III. ...read more.