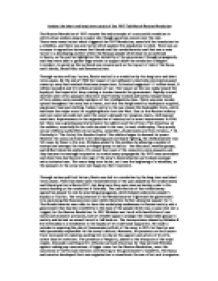 Analyse the short and long term causes of the 1917 Feb/March Russian Revolution The Russian Revolution of 1917 remains the only example of a successful revolution in which urban workers played a major role though questions remain over the role. There were many factors which triggered the 1917 Revolution, some laid the foundation for a rebellion, and there was one factor which sparked the population to rebel. There was an increase in opposition between the liberals and the revolutionaries and that was a main factor in a developing conflict within the Russian people which lead to an outbreak in Russia, as the parties highlighted the instability of the government through propaganda, and they were able to gather huge armies to support allow the revolution to happen. A catalyst, to speed up the outbreak was reasons such as the impact of role of the Duma and Liberals, Bread Riots and Demonstrations. Through various military factors, Russia was led to a revolution by the long term and short term causes. By the end of 1916 the impact of war onRussia's relatively untrained peasant conscript army had reached disastrous proportions. Estimated suggested 1.7 million dead, 8 million wounded and 2.5 million prisoners of war. The impact on the war really wound the loyalty of the Imperial of Army causing a tension towards the government. Rapidly trained draftees were often peasants who were insufficiently trained and led by inexperienced officers whom were normally members of the intelligentsia class. ...read more.

The willingness of the recalled Duma to co-operate proved short-lived. By 1915 hostility has revived and expressed itself in a number of intrigues by its members. By 1916 it was clear that the regime was heading for a crisis which finally arrived in February 1917. The build-up from the gradual desertion of the regime by its liberal and conservative elements, though the final trigger came in a form of a strike. The Kadets, Octobrists and the right-wing deputies formed a progressive Bloc, which campaigned for traditional liberal demands of representative which had the confidence of the public. Nicholas rejected the demand and dismissed the ministers that showed that they were liberal in any shape or form, also anyone who was against his command of the army in 1915. His advisors were replaced with ones who were not prepared to advise Nicholas, and there were an increase in enemies amongst the liberals and they gained ground and directed their attacks against Alexandra. This increase in opposition between the liberals and the revolutionaries, were a main factor in a developing conflict within the Russian people which lead to an outbreak in Russia, as the parties highlighted the instability of the government through propaganda, and they were able to gather huge armies to support allow the revolution to happen. Through various social factors, Russia was led to a revolution by the long term and short term causes. ...read more.

It was not until 1916 that the Ministry of Finance developed alternative source of income, which included the introduction of an income and profit tax, borrowing but most disastrously the printing of more money which led to rapid inflation; money supply grew by 336% but prices rose by 398% This meant that the working class was unhappy as they had food shortages, food queues, cold damp living conditions and poor working conditions. By 1916 the police department warned the government that 'the proletariat of the capital is on the verge of despair...the mass of industrial workers are quite ready to let them go to the wildest excesses of a hunger riot....the labour masses, led by the more advanced and already revolutionary elements of a hunger riot...the labour masses, led by the more advanced revolution elements, assume an openly hostile attitude towards the government and protest with al the means at their disposal against the continuation of the war..." In conclusion, there were many causes to the outbreak of the 1917 February Russian revolution, which ranged from long term causes to a trigger to the epidemic. The most important cause overall is the military defeats in World War One. This brought a low moral to Russian Society and Nicholas upset most of the population by discriminating against the peasants. Nicholas arrogant and oblivious behaviour was also a very important cause for the revolution, and it made the population want change, this would never have happened though if it wasn't for the liberals and revolutionaries impact, steering the propaganda alongside. ...read more.