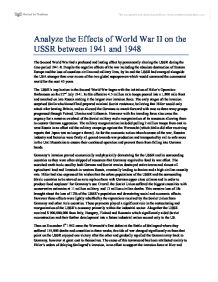 Analyze the Effects of World War II on the USSR between 1941 and 1948 The Second World War had a profound and lasting effect by permanently altering the USSR during the time period 1941-8. Despite the negative effects of the war including the absolute destruction of Eastern Europe and the loss of countless civilian and military lives, by its end the USSR had emerged alongside the USA stronger than ever as one of the two global superpowers which would command the communist world for the next 45 years. The USSR's implication in the Second World War began with the initiation of Hitler's Operation Barbarossa on the 22nd July 1941. In this offensive 4.5 million axis troops poured into a 1,800 mile front and marched on into Russia making it the largest ever invasion force. The early stages of the invasion surprised Stalin who himself had prepared minimal Soviet resistance, believing that Hitler would only attack after beating Britain, and so allowed the Germans to march forward with ease as three army groups progressed through Poland, Ukraine and Lithuania. However with the invading force also came the urgency for a massive overhaul of the Soviet military and a reorganization of its resources allowing them to counter German aggression. ...read more.

The cause of this turnaround has been attributed mainly to Hitler's orders of delaying Stalingrad's invasion, in an effort to support the invasion force at Kiev and crush the uprisings in Yugoslavia and Greece and the freezing cold weather which Germans troops weren't used to. However a historian Viktor Suvorov claims that the key to the USSR's success was a large and better equipped Soviet Army that had secretly planned a counter operation "Thunderstorm" which was implemented two weeks following the German invasion, targeting Axis oil supplies in Romania. Following Operation Barbarossa, on May 11th 1945 all German armed forces surrendered to Soviet troops officially ending the war. However this victory cost the USSR 20% of Russia's overall resources, a large part of its population and almost completely destroyed its infrastructure. However despite the extent of the destruction which surpassed any other countries, Stalin had found himself in a strategic position of power as he now had the largest battle-trained army positioned right at the center of Europe occupying Berlin and large parts of Germany. This gave him leverage against the other Allied powers (which he deeply distrusted) forcing them to give in to his wishes of setting up Soviet friendly governments in East Europe and Germany (or buffer zone) ...read more.

Stalin remained distrustful as ever and even carried out small purges against the same Generals who had won him the war out of fear of their rising popularity. He did this by abolishing the Stavka and GKO while also demoting several top commanders. Also the previously failed policy of collectivization which had temporarily broken down through the war was resumed and re-implemented. However the extent to which this was successful was limited, since by 1950 250,000 kolkhozes had been created, but with almost 50% of land still remaining in private hands. Concluding the Second World War brought a variety of good and bad effects to the Soviet Union. The destruction caused by the German invasion brought the Soviet economy to its knees along with a raging famine which led many people to starvation is argued as placing the Soviet Union as the most severely weakened of all countries that participated in the war. However the wars conclusion also produced a power gap previously occupied by Imperialist European powers which was then filled by the Soviet Union mainly due to its leverage over the other European Nations and the existence of its newly formed battled-hardened military strength. This strength then extended into other areas including a central position on the global stage and breakthrough's in technological and scientific fields. This allowed the Soviet Union to expand its power and influence and develop into a Superpower of the 20th century. ...read more.