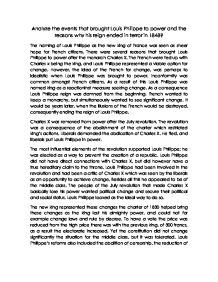 Analyze the events that brought Louis Philippe to power and the reasons why his reign ended in terror in 1848?

Yet the constitution did not change significantly the situation for the middle class, but it was tolerated. Louis Philippe's reforms also included the abolition of censorship, the reduction of clerical influence in education, and the change of Catholicism from the "religion of the state" to simply the religion practiced by the great majority. Louis Philippe belonged to the party of resistance (wanted to change the king and have political stagnation) and his opponents were of the party of movement (wanted reform and political change), as a result there was no significant change in France as people had expected it would be under his reign. The failure to achieve change was one of the most important reasons to the fall of Louis Philippe. He then neglected those who had in essence put him in the throne, additionally did not address social problems. Besides being of a political party that did not meet the aims of the liberals he had three main groups that opposed him. The bonapartists on one hand wanted to reawaken the glorious Napoleonic past, another group was the legitimists that defended the hereditary monarchy, and the third group were the republicans which sought after a political alternative to monarchy. ...read more.

In February of 1848 one of these meetings was prohibited, this provoked serious revolt in Paris. The king continued to refuse to have change in electorate law and the reform movement soon became one of radicals. The revolution in 1848 was a way to overthrow the king and accomplish the aim of having a more equal society in which middle and lower classes which had been neglected could have better representation. The revolutionaries killed soldiers due to the people killed due to the prohibition of the February 22 banquet. The abdication of Louis Philippe was achieved, and the door to having a more fair government was opened with the establishment of a provisional government. Louis Philippe came to power in 1830 as a possible solution to the social and political unfairness that was taking place in France. Inconformity in France made the 1848 revolution inevitable, and the betrayal of Louis Philippe towards the liberals certainly made the situation even more unbearable. Louis Philippe failed to accomplish the ideals of the middle classes that put him initially into power, and even neglected them. The reign of the king ended in terror perhaps not for what he did, but what he failed to do. ...read more.