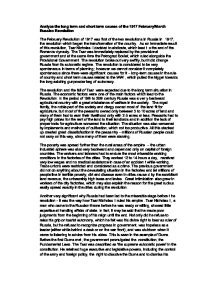 Analyze the long term and short term causes of the 1917 February/March Russian Revolution The February Revolution of 1917 was first of the two revolutions in Russia in 1917, the revolution which began the transformation of the country. As an immediate result of this revolution, Tsar Nicholas II decided to abdicate, which lead to the end of the Romanov dynasty. The Tsar was immediately replaced by the provisional government and at the same time the Petrograd Soviet, which ruled alongside the Provisional Government. The revolution broke out very swiftly, but it did change Russia from its autocratic regime. The revolution is considered to be very spontaneous in terms of planning; however we cannot consider it completely spontaneous since there were significant causes for it - long-term causes in the rule of country and short term causes related to the WWI, which pulled the trigger towards the long existing gunpowder keg of autocracy. The revolution and the fall of Tsar were expected due to the long term situation in Russia. The economic factors were one of the main factors which lead to the Revolution. In the period of 19th to 20th century Russia was a very backward agricultural country with a great misbalance of welfare in the society. ...read more.

Instead of hearing out a suggestion from the Duma, Tsar would always give his own personal advice to the Duma instead. Through the incompetent actions, Tsar had lost the trust of his people - he made wrong decisions for Russia's sake when they stepped into the war with Japan. Tsar's shortest straw for his people was when he decided to open fire to the demonstration on the Bloody Sunday. The society was not content with the work of their leader and therefore, more and more people adapted to alternative reasoning rather which was not in favor of that time's monarchy. It is clear that a lot of people did not want to put up with the constant down spiralling because of the autocracy, many people decided to rise against the situation. These people were split between the reformers and a smaller group of revolutionaries. The reformers, or Liberals, wanted to modernize Russia gradually. They admired the parliamentary systems of Britain, France and the USA. They wanted free elections, more education for the people and no censorship. The revolutionaries, on the other hand, wanted to throw out the whole tsarist system and build a different one. ...read more.

This economic catastrophe developed due to several particular following factors - Russia's cut off from outer aid because of Central Powers blockade, the inadequate transport system and mainly the need of factories to manufacture equipment for the unnaturally enormous army. As simple as that - hunger could not keep people waiting and that made workers break out with strikes and cries saying "Down with Tsar". With Tsar's final moves as a commander in the war, he had lost everything he could lost and his people could not wait anymore - they were physically forced to strike against. Russia had truly experienced dark times before the revolution - especially during the WWI, when people were starving, when soldiers did not completely understand what they were fighting for and when the heir to throne acted completely against interests of the majority. People had finally come to the point, when they were ready to replace their frustration for something new - the society was highly motivated by the ideas of the Bolsheviks. All the observed factors which lead to the revolution clearly lead to the impression that revolution was truly something that which was expected and could be foreseen - people of Russia struggled for a very long time and it was only a temporary question. WWI was the perfect moment for the revolution. ...read more.