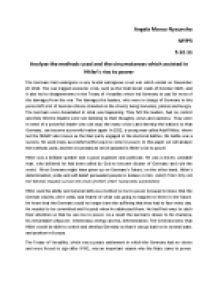 ﻿Angela Moraa Nyauncho MYP5 5.12.11 Analyze the methods used and the circumstances which assisted in Hitler?s rise to power The Germans had undergone a very brutal outrageous cruel war which ended on November 20 1918. The war trigged economic crisis, such as the Wall street crash of October 1929, and it also led to disagreements in the Treaty of Versailles which led Germany to pay for most of the damages from the war. The damages the leaders, who were in charge of Germany in this period left a lot of German citizens stranded on the streets, being homeless, jobless and hungry. The Germans were devastated in what was happening. They felt the leaders, had no control and they felt the leaders were not listening to their thoughts, views and opinions. They were in need of a powerful leader who can stop the many crisis?s and develop the nations so that Germany, can become a powerful nation again. In 1922, a young man called Adolf Hitler, whom led the NSDAP also known as the Nazi party engaged in the electoral battles. His battle was a success. He used many successful tactful ways to come to power. In this paper we will analyze the methods used, and the circumstances which assisted in Hitler?s rise to power. ...read more.

Hitler used the propaganda to bring himself to power. This was a success because Hitler came to power in January 1933, with the help of Dr. Joseph Goebels who was in charge of the propaganda. ("Nazi Propaganda." Wikipedia, the Free Encyclopedia. ) He manipulated the German people with many forms of propaganda, such as media (radio and press) By 1939 Germany had the highest national figure of radio ownership through Nazi party. Nazi influence also extended into film, music, literature and art. The NSDAP also known as the Nazi party had a newspaper called Völkischer Beobachter. The newspapers were always thoroughly prof-read by Nazi’s to make sure everything negative that was happening in German was as bias as possible. Along with the advertisements, there were mass rallies where Hitler addressed the audiences showing off his amazing public speaking skills. (Welch, Professor David. "BBC - History - World Wars: Nazi Propaganda.") Hitler’s hatred towards Jews was terrifying. Hitler would say, quote “The Jews are our misfortune.” This meant that they were bad luck to the Germans. Adolf Hitler’s hatred for Jews began because he believed they “stole” victory from the country in the First World War. He wanted to kill the Jews, or affect them in anyway so that they can live a painful life. ...read more.

This was a time of chaos (the depression) people chose to support Hitler because he was disciplined and his promises on Germans were seen to be, ways to help Germany become a powerful nation once again. The Weimar government also helped Hitler's rise to power because they had a lot of weaknesses; it had many enemies In November 1932, Hitler, in the Reichstag elections, the Nazi Party won 37.3% of the votes (230 seats) proving the Nazi party to be the most popular party. Hitler fortunately went into power because he was chosen by von Hindenberg because he had more popular support than the current Chancellor, von Papan. From that result, it can be considered that Hitler used propaganda, in most cases and he used the weakness of the Weimar republic to rise into power. Hitler was a man who had abilities to persuade and convince them, that he can bring Germany to power. The Nazi?s were very sure of what they said and did, and they knew the human physiology. They knew what each German wanted to hear in the times of depression. He used many methods, such as propaganda, his personal appeal and ability, weakness of Weimar republic, the economic crisis and there were many circumstances which assisted in Hitler?s rise to power. ...read more.