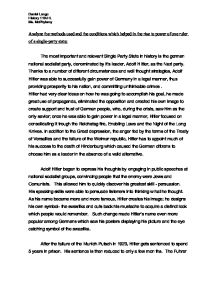 Analyze the methods used and the conditions which helped in the rise to power of one ruler of a single-party state:

Analyze the methods used and the conditions which helped in the rise to power of one ruler of a single-party state: The most important and relevant Single Party State in history is the german national socialist party, denominated by it's leader, Adolf Hitler, as the Nazi party. Thanks to a number of different circumstances and well thought strategies, Adolf Hitler was able to successfully gain power of Germany in a legal manner, thus providing prosperity to his nation, and committing unthinkable crimes. Hitler had very clear ideas on how he was going to accomplish his goal, he made great use of propaganda, eliminated the opposition and created his own image to create support and trust of German people, who, during the crisis, saw him as the only savior; once he was able to gain power in a legal manner, Hitler focused on consolidating it trough the Reichstag fire, Enabling Laws and the Night of the Long Knives. In addition to the Great depression, the anger fed by the terms of the Treaty of Versailles and the failure of the Weimar republic, Hitler has to appoint much of ...read more.

Discouraged by the situation of their country, Germans saw Adolf Hitler as the only way out of the suffering they were going through. Furthermore, Hitler had a very effective method of promoting himself: propaganda played a decisive role in Hitler's election; he made use of the airplane to speak in a number of cities in only one day. This allowed the Nazi leader to be known all over Germany, contrarily to the other electives who primarily ran their campaign in big cities like Munich. Also, Hitler had no opposition as the stormtroopers had the order to eliminate anyone who did not agree with him, diminishing any resistance to the Nazi party. The promises Hitler made to his people were good, however not much different from the ones made by his enemies. Hitler's superiority was granted by the fact that he promised something to everyone, not only the poor or the rich, he was capable of conveying such promises through his speeches which nearly hypnotized the listeners and made him be seen as the superior and most reliable leader. ...read more.

Finally, shortly after Hindenburg's death, which represented Hitler's final obstacle in his run to power, the army swore oath to him as the people voted in favor of Hitler's power on August 19, 1934 Thanks to his outstanding persuasive qualities and determination, together with the conditions Germany was suffering, Adolf Hitler was able to create a one-of- a-kind single party state which got Germany out of the Depression, solved the issue of unemployment and spread Germany's territory all over europe. Thanks to these qualities and successes, Hitler gained the support of a country which, blinded by poverty and hunger, allowed a mentally unstable man to kill 6 million people and commit one of the most tragic genocides in history. This shivering event stands to show how, in a possibly near future, all of us, must be careful is taking decisions and granting power over to one individual who might look different from what he truly is. Never judge a book from it's cover. Daniel Longo History 11th HL Ms. McPhylemy Daniel Longo History 11th HL Ms. McPhylemy ...read more.