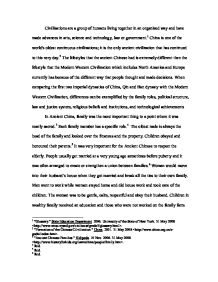 Civilizations are a group of humans living together in an organized way and have made advances in arts, science and technology, law or government.1 China is one of the world's oldest continuous civilizations; it is the only ancient civilization that has continued to this very day.2 The lifestyles that the ancient Chinese had is extremely different then the lifestyle that the Modern Western Civilization which includes North America and Europe currently has because of the different way that people thought and made decisions. When comparing the first two imperial dynasties of China, Qin and Han dynasty with the Modern Western Civilization, differences can be exemplified by the family roles, political structure, law and justice system, religious beliefs and institutions, and technological achievements In Ancient China, family was the most important thing to a point where it was nearly sacred.3 Each family member has a specific role.4 The oldest male is always the head of the family and looked over the finances and the property. Children obeyed and honoured their parents.5 It was very important for the Ancient Chinese to respect the elderly. People usually get married at a very young age sometimes before puberty and it was often arranged to create or strengthen a union between families.6 Women would move into their husband's house when they got married and break all the ties to their own family. Men went to work while women stayed home and did house work and took care of the children. The woman was to be gentle, calm, respectful and obey their husband. Children in wealthy family received an education and those who were not worked on the family farm or for a neighbourhood shop. In Ancient China, women had no value and very little rights; they were there to populate the empire and to do housework. The Ancient Chinese believed that women should not be educated and that the more ignorant she was, the better. ...read more.

Many technological advances were made during the Qin and Han Dynasty of ancient China that changed the lives of the Chinese and the world forever to this day. In the Ancient world inventions were mainly made for survival. For example, the very first compass was made in China by balancing a piece of loadstone, an iron oxide-based mineral that aligns itself in a north-south direction because of the Earth's magnectic field. The loadstone was carved in the shape of a laddle on a round, bronze plate.32 The Chinese used it for finding a good place to bury people, geomancy and fortune-telling.33 This invention is still used to this day mainly for direction. In the year 221 BC during the Qin dynasty, the Emperor defeated all his enemies and unified China for the first time in its history.34 During his reign, the Xiongnu people from the north were a constant threat to the Chinese empire, often coming down to the Yellow River Basin and taking land from people.35 To protect his people and to protect his political power, the Emperor ordered General Meng Tian, commanding 300,000 soldiers, to defeat the enemy. To prevent further attacks by the Xiongnu people, the Emperor ordered for the completing of the six partially complete walls and the extension of the Great Wall.36 Today, the Great wall is one of the most visited attraction is China and it is the only structure made by man that is visible on Earth from space with the naked eye.37 During the Han dynasty the Chinese also invented an iron smelting technology that turned wrought iron into pig iron using blast furnaces.38 Later in this dynasty a Chinese metallurgist discovered that wrought iron and cast iron could be melted to make an alloy of what we call steel.39 This gave the Chinese advantage on making weapons over all the other Civilizations. In the Modern Western Civilization, technological advances are invented to make human's lives easier and better. ...read more.