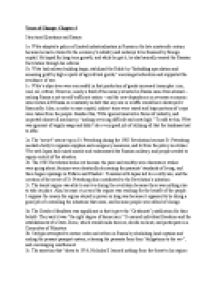 Answers to Questions on Russia and the 1905 Revolution

﻿Years of Change: Chapter 4 Structured Questions and Essays: 1a. Witte adopted a policy of limited industrialization in Russia in the late nineteenth century because he had a vision for the economy?s industry and railways to be financed by foreign capital. He hoped for long-term growth, and while he got it, he also basically caused the Russian Revolution through his reforms. 1b. Witte had railway building begin, stabilized the Ruble by ?forbidding speculation and amassing gold by high exports of agricultural goods,? encouraged education and supported the avoidance of war. 1c. Witte?s objectives were successful in that production of goods increased (examples: iron, coal, oil, cotton). However, nearly a third of the money invested in Russia came from abroad ? making Russia a not-so-self-sufficient nation ? and the new dependence on overseas economic intervention left Russia so constantly in debt that any war or scuffle would have destroyed it financially. Also, in order to raise capital, indirect taxes were raised and huge portions of crops were taken from the people. Besides this, Witte ignored innovative forms of industry, and imported almost all machinery, ?making servicing difficult and costs high.? To add to this, Witte was ignorant of supply usage and didn?t do a very good job of utilizing all that the landmass had to offer. ...read more.

5b. Russia?s ambitions in Manchuria greatly affected its relations with Japan. The two powers argued about rights in both Manchuria and Korea, and were constantly renegotiating. This led to the Russo-Japanese war and Russian humiliation, which amused the rest of the powers greatly and brought Japan a step higher on the social ladder. 6. Russia was a modern industrial power in that it had ambitions in Manchuria, was producing and trading a large amount of iron, coal, cotton, and oil, had a railway system, had connections with its surrounding powers (railway rights in China). It had relations with a number of nations and was exporting a large number of goods. ________________ DBQ?s 1. Source A talks about how the citizens of St. Petersburg ?have become beggars,? ?have been oppressed,? and are ?not recognized as human beings.? Things have gotten so bad for them that they prefer death to the tortures they are enduring. It speaks of strikes, enslavement, and begs for a change. It is different from Source D in that Source D demands a change, rather than asks for one. Source D speaks poorly of the government in saying that it ?continues to stride over corpses.? 2. ...read more.

The bear is shackled and is being led somewhere. Considering the caption is “The voter,” it seems the techniques used are attempting to show the voter being led like an animal to believe the Tsar is benevolent. The thievery shown through the cutting of the man on the left’s sack of grain shows that the government is taking from the peasants, despite the façade of graciousness it works so hard to maintain. iii. The uses and limitations of Source G as evidence of the aftermath of the 1905 revolution are that: the posters share a common theme, the posters depict the Tsar as having made things worse for the people, and that none of the posters were done by the government – this means we only have one side of the story. 1. “1905 was not a revolution at all” is a statement that is both true and false. While people revolted, and reforms were made, the end-result was that things were almost worse than when they’d started. People were even angrier with the Tsar, and resented him immensely, the Tsar began criticizing the people for being ungrateful, and nationwide discontent was prominent. The goal of a revolution is to change the way things are being done – while this was the case for a period of time, as said before, things sort of reverted to the way they were before. ...read more.