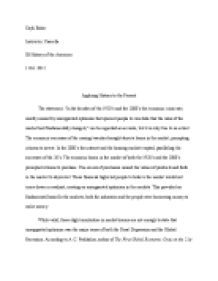 Applying History to the Present - comparing the recessions of the 1920s and the 2000s.

﻿Cayli Baker Instructor: Cascella IB History of the Americas 1 Oct. 2012 Applying History to the Present The statement, ?In the decades of the 1920?s and the 2000?s the economic crisis was mostly caused by unsupported optimism that spurred people to conclude that the rules of the market had fundamentally changed,? can be regarded as accurate, but it is only true to an extent. The economic successes of the roaring twenties brought about a boom in the market, prompting citizens to invest. In the 2000?s the internet and the housing market erupted, paralleling the successes of the 20?s. The economic boom in the market of both the 1920?s and the 2000?s prompted citizens to purchase. ...read more.

The current crisis came from the financial institutions. In the advanced countries, almost all financial and monetary institutions have been bankrupted. It is the institutional crisis? (Prabhakar 1). The National Institute Economic Review carries a similar mentality, claiming that, "The main message is that while monetary policy should 'lean against the wind' when asset bubbles are developing, the crucial fault was a lack of macro prudential regulation, partly because of an institutional silo mentality" (The World Economy 66). Both of these convey the idea that there are not an excess of similarities between the Depression and the Recession; the Great Depression was a result of overproduction accompanied by a lack of demand, while the Recession was prompted by poor decisions made by the financial companies. ...read more.

the ability of certain firms to meet their obligations, their access to capital markets as well as to short-term funding markets became increasingly impaired, and their stock prices fell sharply" (Bernanke 1). This directly expresses that an unsupported optimism was not the source of economic stress; the decisions, actions, and policies of companies brought economic distress. The sources all conclude that the original statement could not be considered the main cause of both the Great Depression and the economic Recession of 2008. While the original statement can be supported it is more reasonable to conclude that the economic crises of both the 1920?s and the 2000?s were partially due to unsupported optimism in the market but largely caused by poor economic policy and bad decisions made by businesses and corporations. ...read more.