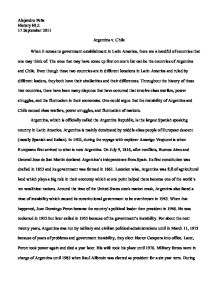 Argentina v. Chile. Even though these two countries are in different locations in Latin America and ruled by different leaders, they both have their similarities and their differences.

Alejandro Pe�a History HL2 17 September 2011 Argentina v. Chile When it comes to government establishment in Latin America, there are a handful of countries that one may think of. The ones that may have come up first on one's list can be the countries of Argentina and Chile. Even though these two countries are in different locations in Latin America and ruled by different leaders, they both have their similarities and their differences. Throughout the history of these two countries, there have been many disputes that have occurred that involve class warfare, power struggles, and the fluctuation in their economies. One could argue that the instability of Argentina and Chile caused class warfare, power struggles, and fluctuation of markets. Argentina, which is officially called the Argentine Republic, is the largest Spanish speaking country in Latin America. Argentina is mainly dominated by middle-class people of European descent (mostly Spanish and Italian). In 1502, during the voyage with explorer Amerigo Vespucci is when Europeans first arrived to what is now Argentina. On July 9, 1816, after conflicts, Buenos Aires and General Jose de San Martin declared Argentina's independence from Spain. Its first constitution was drafted in 1853 and its government was formed in 1861. ...read more.

The government in Chile was getting used to economic and political instability right about the time when Argentina's government was also unstable. In 1964, Eduardo Frei Montalva became the president of Chile. Within three years, the people opposed his administration which caused the beginning of another period of political, social, and economic unrest. The government was overthrown in 1973 which led another military led government. General Pinochet took power in 1980, a new constitution was created. Throughout the times of all the struggles in these two countries, there were many situations that have involved class warfare. On one hand, the country of Argentina is highly populated by the middle class and on the other; the country of Chile was known not to have many people on the poverty level. Argentina's situation, when it comes to it government problems, has always involved the middle class. In the instance when Argentina's government became unstable (about the time of the United States Great Depression) the middle class was the main class struggling and was the one that made the overthrow of 1943 possible to happen. In Chile, on the other hand, had a low number of people in poverty which meant people were either middle class or above. ...read more.

That is one of the reasons why the government may get enough money for the country to become more stable. In Chile's land, they had a substantial amount of copper that they have used to get the country from down low to up high. Both Argentina and Chile also had the land full of agriculture. They can easily grow food and import it to receive more money in return to get their economy and government going. For example, Chile's land is damper than others because it is surrounded by the oceans next to it as opposed to Argentina, which is close to a river which makes it possible for them to have the ability to grow food. This plays a huge role in the fluctuation of their respective markets as it involves money and the way it is gained or used. In conclusion, both the countries of Argentina and Chile, two countries in Latin America that one thinks when one hear to name a country/countries in Latin America. The political, economic, and government problems in both countries have had similar or different outcomes based on what disputes have occurred. These disputes, throughout the history of these two countries, have involved class warfare, power struggles, and the fluctuation in their economies. All in all, one could argue that the instability of Argentina and Chile caused class warfare, power struggles, and fluctuation of markets. ...read more.