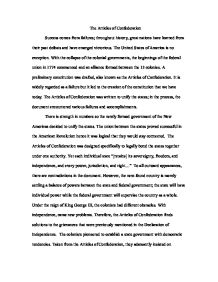 The Articles of Confederation Success comes from failures; throughout history, great nations have learned from their past defeats and have emerged victorious. The United States of America is no exception. With the collapse of the colonial governments, the beginnings of the federal union in 1774 commenced and an alliance formed between the 13 colonies. A preliminary constitution was drafted, also known as the Articles of Confederation. It is widely regarded as a failure but it led to the creation of the constitution that we have today. The Articles of Confederation was written to unify the states; in the process, the document encountered various failures and accomplishments. There is strength in numbers so the newly formed government of the New Americas decided to unify the states. The union between the states proved successful in the American Revolution hence it was logical that they would stay connected. The Articles of Confederation was designed specifically to legally bond the states together under one authority. Yet each individual state "[retains] its sovereignty, freedom, and independence, and every power, jurisdiction, and right..." ...read more.

They began to communicate and collaborate. In order for a law to be passed, nine out of the 13 states must have had to vote in favor it. Representatives from each colony must have agreed to some degree in order for the government to run smoothly. They built new relationships and maintained connections. While they were working together, the states maintained their separate governments. The New Americas recently ended a war over independence and they were not about to renounce any rights that they gained to a new governing body. England had oppressed them for too long so the colonists decided against a single central government in exchange for a multitude of local governments. With several authoritative governments, conflict arose. The states were unable to establish borders without quarrelling. The Land Ordinance of 1784 and the Northwest Ordinance of 1787 instituted a system that was set up for the purpose of surveying and dividing western lands. It created an organized and civil method to distribute land. ...read more.

The Independence War left the new colonies with a tremendous debt that they were unable to pay off since the central government could not tax the states. A great economic depression followed as a result. Subsequently, Massachusetts attempted to solve its finance problems by implementing a stamp act. One of the colonies resorted to a failed British tactic. England needed to pay its debt from the French and Indian so they employed a stamp on the colonies. It created an uproar in the New Americas in both accounts because the colonists felt overtaxed and underrepresented. Shay's Rebellion was a direct result from the new tax. Farmers were outraged and disrupted a meeting at Hampshire Country Court in 1786. Which in turn illustrates that the Articles of Confederation failed to prevent the repeat of past mistakes. The Articles of Confederation is a prime example of a good "bad example". It was created to lay down a foundation for the new nation; however, it did not perform the task flawlessly. The document did have a few achievements but it was not an overall success. The Articles of Confederation was a key stage for the United States to get to where it is today. ...read more.