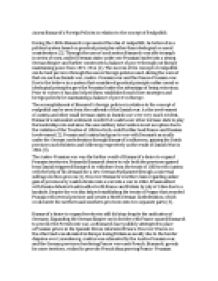 Assess Bismarcks Foreign Policies in relation to the concept of Realpolitik

﻿Assess Bismarck?s Foreign Policies in relation to the concept of Realpolitik During the 1800s Bismarck represented the idea of realpolitik, he believed in a political system based on practical principles rather than ideological or moral consideration (2). Through the uses of such notion Bismarck was able triumph in series of wars, unified German state; under one Prussian leader into a strong German Empire and further constructed a balance of power through out Europe maintaining peace from 1871-1914 (2). The success of the concept of realpolitik can be best perceive through the uses of foreign policies used, during the wars of that era such as Danish war, Austro- Prussian war and the Franco-Prussian war. ...read more.

Prussia and Austria had gone to war with Denmark as an ally under the German confederation through Bismarck?s influences, gaining the Dutch provinces such Holstein and Schleswig respectively as the result of Danish War in 1864 (3). The Austro-Prussian war was the further result of Bismarck?s desire to expand Prussian territories. Primarily Bismarck desire to rule both the provinces gained from Danish triggered Bismarck to withdraw from the treaty of 1850s with Austria with the help of his demand for a new German Parliament through a universal suffrage election process (2). However Bismarck?s further claim regarding unfair gain of provinces by Austria broke into a war into a war in 1866. Prussia allied with Russia defeated Austria allied with France and Britain by july of 1866 due to a landside. ...read more.

Bismarck used German Press to demean the France including its king and its people. France declared war on Prussia in July 1870. The states a Germany united under the North German Confederation and fought the French winning another landslide war. Awarding Germany with the provinces of Alsace and Lorraine. (4) In all these wars, Bismarck triggered nations to provoke war instead of openly declaring war. Making all these cases in favour of him allowed him to say that he was the one attacked and not the other way around reflect. Despite using his strong military, well as threats Bismarck?s policies with Austria differed in the fact that he had been allies with Austria and turned on them. He used political threats to provoke war by threatening the German Confederation. Bismarck used social means to provoke France into war by antagonizing France and using the German Press to demean France. ...read more.