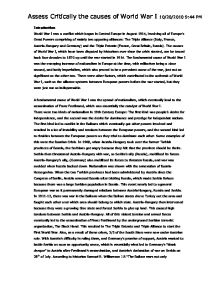 Assess critically the causes of world war I

Introduction World War I was a conflict which began in Central Europe in August 1914, involving all of Europe's Great Powers comprising of mainly two opposing alliances: The Triple Alliance (Italy, France, Austria-Hungary and Germany) and the Triple Entente (France, Great Britain, Russia). The causes of World War I, which have been disputed by historians ever since the crisis started, can be traced back four decades to 1870 up until the war started in 1914. The fundamental cause of World War I was the sweeping increase of nationalism in Europe at the time, with militarism being a close second, and lastly imperialism, which also proved to be a prevalent cause of the war, just not as significant as the other two. There were other factors, which contributed to the outbreak of World War I, such as the alliance systems between European powers before the war started, but they were just not as indispensable. A fundamental cause of World War I was the spread of nationalism, which eventually lead to the assassination of Franz Ferdinand, which was essentially the catalyst of World War I. There were two kinds of nationalism in 19th Century Europe: The first kind was people's desire for independence, and the second was the desire for dominance and prestige for independent nations. ...read more.

The race was prominent between 1900 and 1914. There was a significant rise in the army and naval estimates of the European powers in these years. From 1910 to 1914, while France increased her defense expenditure by 10%, Britain by 13%, Russia by 39%, Germany was the most militaristic as she increased by 73%. Increased war expenditure enabled all the powers to raise more armies and improve their battleships and meant that all the European powers were prepared for war by 1914. Britain produced her first Dreadnought in 1906. Dreadnoughts set a new standard in naval arms, so this intensified the naval race. Between 1909 and 1911 Germany built nine Dreadnoughts while Britain completed 18 Dreadnoughts. Increased military and naval rivalry not only led to the belief that war was coming, but as historian Samuel R. Williamson stated, "German, British and Austro-Hungarian leaders then started believing that offensive warfare offered a possibility of quick success to this problem". Germany's Schlieffen Plan meant that Germany entered Belgium, which in turn broke the terms of The Treaty of London, which stated that Belgium would remain a neutral country. Britain then declared war to obey the terms of the Treaty of London, which therefore led the countries into war because the alliance system meant that certain countries had to help each other out if help was needed. ...read more.

rivalry so that by 1914, colonial disputes had diminished, historians such as A.J.P Taylor and Fritz Fischer believe that countries like "Germany deliberately engineered the war in pursuit of expansionist aims," therefore showing that there is a causal link between imperialism and the First World War. In conclusion, Nationalism, Militarism and Imperialism were significant factors in causing the First World War. There were other factors such as the alliance system which contributed to the outbreak of World War I. Historian Lee argues that "the alliances can't be sufficient explanations for the outbreak of war because they were defensive (i.e 1879 Dual Alliance), and the way the war broke out had little relation to treaty obligations (e.g.) Russia had no contractual obligation to assist Serbia)." However, it is quite clear to see that during the alliance system, if one country declared war on another, the allies of both countries would join the war as well, to support their allies (E.g Germany and A-H, Russia and Serbia). Many countries simply got involved because they were allies with another country and had promised to defend them. Alliances also affected colonization and "had direct bearing on the arms race and development of military schedules." Words: 1554 Assess Critically the causes of World War I 10/20/10 9:44 PM 10/20/10 9:44 PM 10/20/10 9:44 PM ...read more.