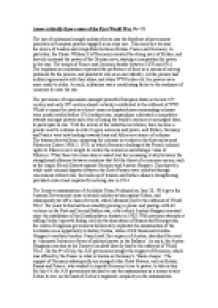 ﻿Assess critically three causes of the First World War Nov 03 The rise of militarism brought military forces into the forefront of government priorities as European powers engaged in an arms race. This arms race became the source of tension and competition between Britain, France and Germany. In particular, the Kaiser William II of Germany resented the strong navy of Britain, and heavily increased the power of the German navy, starting a competition for power in the seas. The armies of France and Germany double between 1870 and 1914. The emphasis on militarism expressed the preference of force as a means of solving problems for the powers, and pointed to war as an inevitability. All the powers had military agreements with their allies, and when WWI broke out, the powers were more ready to strike. As such, militarism was a contributing factor to the readiness of countries to enter the war. ...read more.

What these two crises also revealed was the increasing rivalry between the strengthened alliances between countries that felt the threat of a common enemy, such as the Anglo-French Entente against Germany and Austria-Hungary. Conclusively, while most colonial disputes between the Great Powers were resolved through concessions without war, the build-up of tension and further alliance strengthening provided context and impetus for entering war in 1914. The Sarajevo assassination of Archduke Franz Ferdinand on June 28, 1914 gave the Austrian Government cause to launch military action against Serbia, and subsequently set off a chain of events, which ultimately led to the outbreak of World War I. For years Serbia had been steadily growing in power and prestige with its? victories in the First and Second Balkan war, a fact which Austria-Hungary resented since the installation of the Karadjordjevic dynasty in 1903. ...read more.

At this time, the Russian government (25 July) vowed to mobilize should Serbia be attacked. On the same day, Serbia replied to the ultimatum by accepting all but one of the conditions, knowing that this could lead to the outbreak of war, and mobilized. When the reply was received, A-H then mobilized, and by the 6th of August all the Great Powers of Europe apart from Italy had involved themselves in what became WWI. The Sarajevo assassination therefore can be seen as a defining moment in the outbreak of the Great War in that it was deliberately exploited by Austria-Hungary In conclusion, while there were varying reasons for the outbreak of the Great War, factors such as imperialism and militarism were not direct causes, but rather allowed for the build-up of tension and preparation for war, so that when the July Crisis lead to war, the Great Powers of Europe were ready to participate both militarily and interest-wise. ...read more.