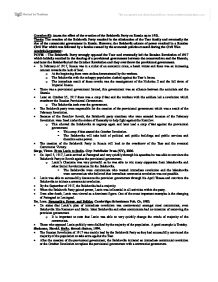 Assess the effect of the creation of the Bolshevik Party on Russia up to 1921.

Question #2: Assess the effect of the creation of the Bolshevik Party on Russia up to 1921. Thesis: The creation of the Bolshevik Party resulted in the elimination of the Tsar family and eventually the rise of the communist government in Russia. However, the Bolshevik seizure of power resulted in a Russian Civil War which was followed by a famine caused by the economic policies created during the Civil War. Analysis/Argument: POV#1 - The Bolshevik Party strongly opposed the Tsar and eventually led the Russian Revolution of 1917 which initially resulted in the sharing of a provisional government between the conservatives and the liberals, and later the Bolsheviks led the October Revolution and they overthrew the provisional government. * In February of 1917, Russia was in a midst of an economic crisis, a harsh winter and there was an increasing concern towards the lack of food. o At the beginning there were strikes demonstrated by the workers. o The Bolsheviks with the unhappy population clashed against the Tsar's forces. o The immediate result of these revolts was the reassignment of the Nicholas II and the fall down of Imperial Russia. * There was a provisional government formed, this government was an alliance between the socialists and the liberals. * Later on October 25, 1917 there was a coup d'�tat and the workers with the soldiers led a revolution which overthrew the Russian Provisional Government. ...read more.

o During the Red Terror Lenin used extreme measures towards the extermination of whole social groups or more specifically the ruling class. * In 1917, Lenin created the Cheka which was used as a tool to manage the Red Terror. * With the used of the Red Army and Cheka Lenin exe Conquest, Robert. Reflections on a Ravaged Century. New York: W.W. Norton, 2000. * Clearly Lenin was a ruthless individual and believed that mass annihilation was the answer to the achievement and retaining of power. o Lenin: "To overcome of our enemies we must have our own socialist militarism. We must carry along with us 90 million out of the 100 million of Soviet Russia's population. As for the rest, we have nothing to say to them. They must be annihilated."(pg.101) o During 1908, Lenin had already predicted the Red Terror "real, nation-wide terror, which reinvigorates the country".(pg. 98) * Under the orders of Lenin all workers who refused to work on Sundays were arrested by the Cheka and were sent to labour camps. o According to Lenin, those who refused to world during weekends were counter-revolutionaries. * Historians like Conquest believe that Lenin's initiation of the Red Terror was essential for the Bolsheviks to retain power, as they had no support from the majority of the population o This fact is backed by the fact that the Bolsheviks only won one quarter of the population's vote during the height of their fame. ...read more.

o The main intention of War Communism was to finance and supply the Red Army and because of it the public were the ones who suffered the most. * However, initially the public were not quite and expressed their sufferings. But the Bolsheviks viewed this as a sign of anti-Revolutionary and started arresting and executing those who did not obey. The arresting and executing of oppositions was called the Red Terror. * The Red Terror will be ingrained in the memory of all Russians and it will take a long time for them to forget the atrocities committed by the Bolsheviks. * After the Civil war the public of Russia faced a famine because of the harsh economic conditions that were imposed on them by the War Communism policy. Conclusion: The creation of the Bolshevik Party eventually resulted in a drastic change in Russia. The Tsar family and the Imperial Russia was eliminated and the Bolsheviks took control of the government in 1917. The Bolshevik seizure of power resulted in the Russian Civil war, which was led by the counter-Revolutionaries against the Reds. During the War, Lenin and Trotsky advocated the Red Terror and implemented the Economic policies such as War Communism and NEP. By the end of 1921, Russia was in a state of famine and the population was suffering from the poor economic state of country, not mentioning the millions who had died. ...read more.