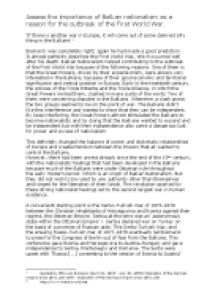 ﻿Assess the importance of Balkan nationalism as a reason for the outbreak of the First World War. ?If there is another war in Europe, it will come out of some damned silly thing in the Balkans? [1] Bismarck was completely right; again he had made a good prediction. It almost perfectly describes the First World War, which occurred well after his death. Balkan Nationalism helped contributing to the outbreak of the First World War because of the following reasons. One of them is that the Great Powers, driven by their expansionism, were always very interested in the Balkans, because of their good economic and territorial significance and central position in Europe. Early in the twentieth century, the policies of the Triple Entente and the Triple Alliance, in which the Great Powers invited them, clashed in many parts of the world. Two of them were concerning disputes in the Balkans. Whenever a clash arose, the two groups seemed to be on the point of war. The Balkans didn?t like this interference and wanted to show that they can be independent. By keep interfering, the Great Powers almost stimulated the Balkans to become nationalistic and by doing that the Balkans wanted to expand and be independent but with their independence also came a dangerous lust for power and excess of nationalism. ...read more.

It can?t help because it?s too weak after the defeat in Russo-Japanese War. Therefore, Russia is humiliated and needs to prove that it?s still a Great Power. This also why, Russia is almost forced to join the First World War in aid of Serbia. Which is another reason for the importance of Balkan Nationalism. The Ottoman Empire, however, still controlled parts of the Balkans but they now felt capable of governing themselves; after the victories they had conceived from their war. Also the defeat of the Ottoman Empire again added to Balkan Nationalism and also led to the formation of the Balkan League. ?Nationalism is an infantile disease. It is the measles of mankind?.[5] Einstein was talking about extremist nationalism, which will always be a problem. Einstein was right in because after the First World War we were confronted with Fascism and Communism another form of Nationalism. The Balkan League was formed in 1912 by Serbia, Bulgaria, Greece and Montenegro. Their goal was the expulsion of the Turks from the Balkans. Because of the growing nationalism from these four countries, they sought power and prestige through defeat of their old regime. Turkey was in decline after the Turkish Revolution from ?the Young Turks? and their war with Italy in 1912. ...read more.

a good reason to attack the area they wanted to control for so long already.[7] So they send Serbia an ultimatum and asked Germany for help. Germany agreed and the war started 6 weeks after the assassination, as soon as Austria?Hungary attacked Serbia. So Austria-Hungary was supported by Germany and Serbia was supported by Russia, who had to recover from the humiliation to which she was subject during the Bosnian Crisis, finally coming in aid of Serbia. Through the strong Nationalism in the Balkans, wars were fought and lost, the Ottoman Empire collapsed, the ?Sick Man of Europe?. The Nationalism gave a lot of Balkan states independence, it definitely changed the balance of power and diplomatic relationships of Europe and created tension between the Powers that all wanted to control the Balkans now that the Ottoman Empire was gone and hence became rivals and finally resulted in the assassination of Franz Ferdinand and eventually the First World War. The Balkans managed to play an important part in the history of Europe through their search for self-determination. Within the Balkans, the nationalism of the early 19th century erupted into an ocean of patriotic fervor. Their desire helped bring them towards their freedom; however, with their independence also came a dangerous lust for power and excess of nationalism. ...read more.