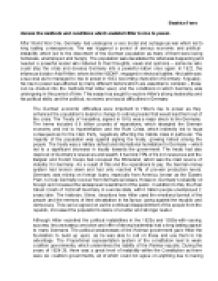 Assess the methods and conditions which enabled Hitler to rise to power.

﻿Beatrice Ferro Assess the methods and conditions which enabled Hitler to rise to power. After World War One, Germany had undergone a very brutal and outrageous war which led to long lasting consequences. The war triggered a period of serious economic and political instability which led to the discontent of the German population as many of them were being homeless, unemployed and hungry. The population was devastated for what was happening and needed a powerful leader who listened to their thoughts, views and opinions ? someone who could stop the crisis and develop Germany into a powerful nation once again. In 1922, the infamous dictator Adolf Hitler, whom led the NSDAP, engaged in electoral battles. His battle was a success as he managed to rise to power in 1933, becoming chancellor of Germany. Arguably, his rise to power was affected by many different factors which are essential to consider ? these can be divided into the methods that Hitler used, and the conditions in which Germany was undergoing in this period of time. This essay has sought to explore Hitler's strong leadership and his political skills, and the political, economic and social difficulties in Germany. ...read more.

The murdering of Rathenau in 1922, the man who signed the treaty, demonstrated how the German people felt about the situation; many felt as if they had been 'stabbed in the back'. Hitler exploited this and used the 'stab in the back myth' in his election campaigns. Therefore, he gained support from the left and right wing voters, and as a result, increasing the fame for the Nazi party. Hitler's recognition of the psychology of the people played a significant role in the formation of promises and policies of the Nazi Party, and consequently to their rise to power. The people, in shock with the deterioration of their country, were in need for someone to blame. Hitler provided emotional relief for the people by blaming the Jews and communists for the 'betrayal', the defeat of Germany in the war and the suffering of the people; including the post-war turmoil of the provisional government and the Treaty of Versailles. This could be argued that it makes the German people feel good about themselves by shifting the blame on other races. It also plants the dislike of communism and encourages the growth of unity and nationalist views that Hitler wanted for his fascist regime ? Germany strong as a nation, with individualism discouraged. ...read more.

Hitler also used the SA to intimidate the Church and attack the members of the Catholic Centre Party, and as a result of this, the Church of Germany agreed to give up all political activity by the end of July 1933. In addition to this, Hitler's political skills also influenced his rise to power. During the elections, he was seen to be the only leader to go around Germany and give speeches to the public. Almost all the Nazi party campaign funds were spent on flying Hitler around Germany, however this resulted in a successful increase in the Reichstag seats. In November 1932, the party had 230 seats compared to some of its opposing parties such as the Communists with only 89. The individual methods that Hitler used, and the conditions that Germany was in at that period of time greatly influenced Hitler's rise to power. The political and economic difficulties of Germany due to the Weimar Republic, and the defeat of WW1 created the foundations for Hitler's rise. Although, the success of Hitler's rise to power also has to consider the fact that the Nazi party's ideology and aims were appealing to the German public. Hitler also effectively took advantage of the use of propaganda and also his own potential as and influential leader. ...read more.