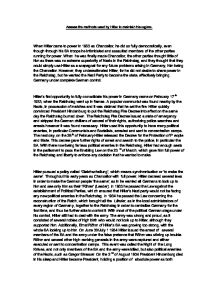 Assess the methods used by Hitler to maintain his regime

Assess the methods used by Hitler to maintain his regime. When Hitler came to power in 1933 as Chancellor, he did so fully democratically, even though through his SA troops he intimidated and assaulted members of the other parties running for power. When he was finally made Chancellor, the other parties thought little of him as there was no extreme superiority of Nazis in the Reichstag, and they thought that they could simply use Hitler as a scapegoat for any future problems arising in Germany, him being the Chancellor. However, they underestimated Hitler, for he did not desire to share power in the Reichstag, but he wanted the Nazi Party to become the state, effectively bringing Germany under complete German control. Hitler's first opportunity to fully consolidate his power in Germany came on February 17th 1933, when the Reichstag went up in flames. A popular communist was found nearby by the Nazis, in possession of matches and it was claimed that he set the fire. Hitler quickly convinced President Hindenburg to put the Reichstag Fire Decree into effect on the same day the Reichstag burned down. The Reichstag Fire Decree issued a state of emergency and stripped the German civilians of several of their rights, authorizing police searches and arrests however it was found necessary. ...read more.

This event was called the Night of the Long Knives, and not only members of the SA and the army were killed, but also political enemies of the Nazis, such as Gregor Strasser. On the 2nd of August 1934 President Hindenburg died in his sleep and Hitler became President, holding a position of absolute power as both Chancellor and President of Germany. He then made the soldiers and sailors of Germany swear an oath of allegiance to him that was more an oath of allegiance to Hitler personally than one to the President of Germany. With the internal political situation fully under control, Hitler still had to indoctrinate the German people and establish a cult of personality in which all the people worshipped him as their supreme leader. He did this through several means. One was to win their favour by eliminating unemployment in Germany. Unemployment was at 6 million unemployed people in 1933, but by 1939 it had gone down to only 200,000. This was because Hitler was rearming Germany. In that one stroke he made the people happy by giving them jobs, he pleased the army by making them see the pride of Germany's army being rebuilt, and he prepared for his future conquests of Europe. He created these free work spaces by shunning and driving away the Jews, and in 1935 Hitler released the Nuremberg Laws, in which it was clearly stated that marriage with Jews and extra-marital relations with Jews was strictly forbidden for Germans. ...read more.

People even stopped attending church, as the Nazi Party had replaced most religion in Germany. Himmler was able to fully exploit the situation because Hitler was bored by administrative duties and he let his subordinated do all the work as they pleased, believing that all issues would thus solve themselves. Some think that Hitler was just plain bad at ruling and that contributed to his lack of decision-making, but it is also commonly believed that Hitler was employing a tactic of 'divide and rule', by which he made sure that there could be no cooperation between his subordinated and that they would all go their own way, thus giving him full power to command. In conclusion, once Hitler had brought the government under his control it became a matter of indoctrinating the people of Germany and creating a cult of personality in which he would be the God-Leader of Germany. He achieved this through the use of terror (through the SS and the police which he controlled) and media manipulation (by which Joseph Goebbels made the life of every German revolve around Hitler). Also, by making the army swear a personal oath of allegiance he had the military fully under his control. This is why by 1939 Hitler was in full control of Germany as a country, over which he had established himself as the absolute F�hrer. ...read more.