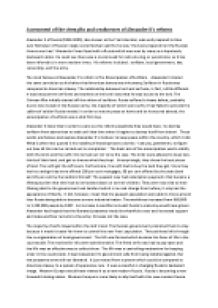 Assess the strengths and weaknesses of Alexander II of Russia's reforms.

﻿Assessment of the strengths and weaknesses of Alexander II?s reforms Alexander II of Russia (1855-1881), also known as the Tsar Liberator, was well prepared to take over Nicholas I of Russia?s reign; Lionel Kochan said the he was, ?the best prepared heir the Russian throne ever had.? Alexander II was faced with a Russia which was seen by many as a hopelessly backward nation. He could see there was a crucial need for restructuring, or perestroika, as it has been referred to in more modern times. His reforms included: serfdom, local government, law, censorship, and the army. The most famous of Alexander II?s reform is The Emancipation of Serfdom. Alexander II shared the same conviction as his father that American slavery was inhumane; Serfdom in Russia was compared to American slavery. The relationship between lord and serf was, in fact, a little different. It was because the serf lived and worked on the lord?s land that he was bound to the lord. The Crimean War initially started off the reform of serfdom. Russia suffered a heavy defeat, probably due to low morale in the Russian army, the majority of which were serfs; it had failed to provide the calibre of soldier Russia needed. In order to restore peace at home and be honoured abroad, the emancipation of serfdom was a vital first step. ...read more.

A zemstvo was set up in every district and province. These new democratic zemstva dealt with issues of: public health, prisons, roads, agriculture, the relief of famine and some areas of education. Furthermore, the zemstva were vital for society to function because the land owners are now not responsible for the peasantry?s needs. The idea of the zemstva soon extended to urban areas where they were called dumy, duma singular. The zemstva and dumy gave Russia a proper local government system. It also gave them a representative political system. This is a western idea going against the traditional autocratic rule, which was used in Russia. The zemstva and dumy were often criticised for their inadequacies when compared to western administrative systems. But it is development to a more democratic society. It is Russia becoming more western. Although this new system of local government is more democratic, there was still an imbalance. The gentry had 42 per cent of seats in the uezd, district zemstva, and 72 per cent of seats in the guberniya, provincial zemstva. The relative proportions for the peasantry were 38 per cent and 10.5 per cent. Before the reforms, the peasantry?s chances of justice were very little. They were guilty until proven innocent. In courts, there were no juries and the judge often only examined written evidence. ...read more.

These reforms were applicable to everyone, regardless of social standing, according in the new statue on recruitment in 1874. Miliutin?s other reforms included: dividing the empire into 15 military districts to make mobilisation easier; modernise Russia?s military training establishment; and general education for officers was made the first objective over pure military training. Miliutin?s made the army look more attractive to citizens. It was now not seen as a life sentence to servitude. People now expected to return to their town or village, and would be better equipped to run daily life and contribute to their community. Morale was boosted. But, in the army, there was no class system in place, everyone was equal. This meant that they started to feel equal to one another and create hostility towards Russia?s social system thus sparking revolutionary actions; Greater social equality was encouraged within the military. However, with equality, the army would strengthen as a unit because people would be inclined to work with each other. All of Alexander II?s reforms had one motive: to regain Russia?s dominance in the global society. Alexander II wanted Russia to compete with the west and this shows in his reforms. There were strengths and weaknesses to his reforms because he wanted to maintain an autocratic rule but to be on par with the west he would have to liberalise. Alexander II was thinking what is best for Russia?s place in the world than for Russia?s people. Alexander II made Russia look western whilst trying to maintain Slavic culture. ...read more.