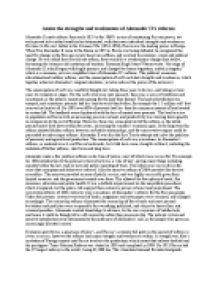 Assess the strengths and weaknesses of Alexander IIs reforms.

﻿Assess the strengths and weaknesses of Alexander II?s reforms[a]. Alexander II made reforms from early 1855 to the 1860?s in aim of maintaining Russian power, yet each proved to be either beneficial or detrimental, with their own individual strengths and weaknesses. Previous to Russia?s defeat in the Crimean War (1854-1856), Russia was the leading power in Europe. When Tsar Alexander II came to the throne in 1855 as Russia was being defeated, he recognised the need for change in the Russian society based on serfdom, and resistant to economic, social and political change. He was afraid that if he did not reform, there would be a revolutionary change from below, destroying the centuries old institution of tsardom. Historian Hugh Seton-Watson wrote: ?the reign of Alexander II, which began with bright promise, and changed to dreary stagnation, ended in tragedy,? which is a common, yet over simplified view of Alexander II?s reforms. The political, economic, educational and military reforms, and the emancipation of serfs each had strengths and weaknesses which together achieved Alexander?s original intentions, yet also reduced the power of the autocracy. The emancipation of serfs was carefully thought out, taking three years to discuss, and taking several years to complete in stages. For the serfs, who were now peasants, there was a sense of confusion and resentment, as the reforms meant now paying for the land they farmed. ...read more.

The censorship reforms eliminated the censorship of these books and most journals but editors and publishes were responsible for everything published, and subject to heavy fines and criminal penalties. Alexander wanted knowledge to advance, but he was suspicious of intellectuals and hence it could be thought of as self-censorship rather than precensorship. The judicial system and zemstvo introduction were detrimental to the autocracy of Alexander?s rule, as the people were given an increasingly liberated society. Economic growth was a great aim of Alex?s, and Russia?s economy did grow in this period of reform so it was a success, however the reforms had many strengths and weaknesses within. A strength was Alex?s invitation of Foreign experts into Russia to advise the production, which meant that railway doubled and the prestigious Trans-Siberian Railway was started in 1891 and completed in 1904. By 1913 Russia had the 2nd largest railway in the world - being 62, 000 km. This stimulated demand for industrial goods. Another strength was his decision to put the Rouble on the Gold Standard in 1987, which established the currency and improved Russia?s reputation amongst the rest of Europe. Alex?s emancipation of serfs provided more people to work for the government (to earn money and give it to government) and the payments, taxes and redemption taxes were communally collected and paid, and no peasants were free to leave the commune without permission of the Mir. ...read more.

These educational reforms changed and freed a section of Russia, which helped to equalise the classes and allowed students to gather and express views without fear of being persecuted, so for the people was very beneficial. The Military Service Reform of 1874 was introduced by Minister of War, Count Dmitry Milyutin, after Russia?s defeat in the Crimean War. The old system was replaced by conscription by lottery for all classes, and was compulsory for all males of age 20. Military districts were created across the country, and the Russian Army now had permanent barracks instead of dugouts and shacks, and the military education was improved and available to all draftees. Alexander made the necessary change to regain the power in Russia?s army. To prove the strength in this reform of Alexander?s, the new army performed well in the difficult conditions of the war against the Turks in 1877. Unfortunately, although as this essay has discussed many of Alexander?s reforms were successful, they did not satisfy many Russians due to the growing opposition, and as Historian Geoffrey Hosking concluded, ?the reforms of Alexander II went a long way towards erecting the framework for a civil society however, the government, realizing the danger in what it was doing, then held back.? The reforms were successful in achieving the growth of new ideas, and something ?new? that Russia had never experienced ? knowledge and opposition that Alexander didn?t want. [a]Too positive, do emancipation 1st paragraph, and acknowledge the overall negatives of his reforms. IS Department ...read more.