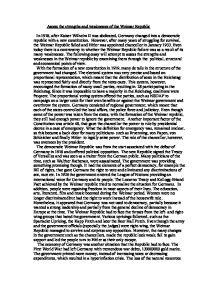 Assess the strengths and weaknesses of the Weimar Republic

Assess the strengths and weaknesses of the Weimar Republic In 1918, after Kaiser Wilhelm II was abdicated, Germany changed into a democratic republic with a new constitution. However, after many years of struggling for survival, the Weimar Republic failed and Hitler was appointed chancellor in January 1933. Even today there is a controversy to whether the Weimar Republic failure was as a result of its many weaknesses. The following essay will attempt to assess the strengths and weaknesses in the Weimar republic by examining them through the political, structural and economical points of view. With the formation of a new constitution in 1919, many details in the structure of the government had changed. The electoral system was very precise and based on proportional representation, which meant that the distribution of seats in the Reichstag was represented fairly and directly from the votes casts. This system, however, encouraged the formation of many small parties, resulting in 28 participating in the Reichstag. ...read more.

Many politicians of the time, such as Walther Rathenau, were assassinated. The government was providing something promising though. It had the elements of a perfect democracy, for example the Bill of rights, that gave Germans the right to vote and eliminated any discriminations of sex, race etc. In 1926 the government entered the League of Nations providing an international voice for Germany and its people. The Locarno Treaty and Kellogg-Briand Pact achieved by the Weimar republic tried to normalize the situation for Germans. In addition, people were regaining freedom in most aspects of their lives. The education, arts, literature, film and music boomed during the Weimar period. Women were no longer discriminated but had the right to work instead of the housewife role. Nonetheless, it appeared that Germany was not used to democracy, partially because it wanted a strong leadership and partially from the general decline of democracy in Europe at the time. The Weimar Republic had to face the threats from the left- and right-wing groups that hated the government. ...read more.

One of the weaknesses that was about to form in the German economy was the two huge loans USA propped up the Weimar Republic in the Dawes Plan, 1924 and the Young Plan, 1929. The German economy became dependent on USA. When the Wall Street Crash and Depression hit the US, the loans were required back to assist the American economy and German economy was devastated. Even though Gustav Stresemann had died in 1929 he had long foreseen what would happen. "The economic position is only flourishing on the surface. Germany is in fact dancing on a volcano. If the short-term credits are called in, a large section of our economy would collapse." In conclusion, the Weimar Republic had many strengths and weaknesses. The structure provided a fair and precise representation even of the smallest parties, but it gave the opportunity to small parties such as NSDAP to gain immense support and . The Republic had all the perfect democratic means, but the German society was undemocratic and had just finished a world war where the Republic was seen as a traitor. The German economy was fragile from its beginning, but the experiments of the Weimar republic weakened it. ...read more.