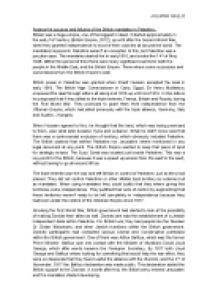 Assess the success and failures of the British mandates in Palestine

﻿JULIANA GALLO Assess the success and failures of the British mandates in Palestine. Britain was a huge empire, one of the biggest in deed. It started approximately in the early 16th century (British Empire, 2012), up until after the Second World War, when they granted independence to most of their colonies all around the world. The mandates imposed in Palestine weren?t an exception to this, but Palestine was a peculiar case. The mandates started the in early1916, and ended the 14th of May 1948. Within this period of time there were many significant events for both the people in the Middle East, and the British Empire. There where some successes and some failures from the British Empire?s side. British power in Palestine was granted when Sharif Hussein accepted the deal in early 1916. The British High Commissioner in Cairo, Egypt, Sir Henry McMahon, proposed this deal through letters all along mid 1915 up until mid 1916. In this letters he proposed that if they allied to the triple entente, France, Britain and Russia, during the First World War. They promised to grant them their independence from the Ottoman Empire, which had allied previously with the triple alliance, Germany, Italy and Austria ? Hungary. When Hussein agreed to this, he thought that the land, which was being promised to them, was what later became Syria and Lebanon. What he didn?t know was that there was a controversial exclusion of territory, which obviously included Palestine. ...read more.

This mandate method supported the self-determination of colonies, but it also supported the French and Britain control over the Middle East. In 1922 they where approved by the League of Nations. Right from the start of the mandates, British had deceived their word, when having the misunderstanding with Hussein. There were a lot of inconvenient because as British had promised Hussein some land, it had also made an agreement, Sykes ? Picot, with France promising Arab land as well. And now with the Balfour declaration it was completely confusing for the Arab Palestinian on which side they where. This caused some violent disturbance within 1920 and 1921. So Britain decided to take action and write a White Paper, created by Winston Churchill, who as the Secretary of State for the Colonies, tried to clear out any doubts caused by the controversy between the Balfour Declaration, their promises to Hussein and their agreement with France. Churchill wrote the White Paper on the 3rd of July 1922, in which he stated that British supported the Jewish having an established piece of land in Palestine, like they had said in the Balfour declaration and then supported in the San Remo conference in April of 1920, and in the Treaty of Sevres. But this didn?t mean that all the Palestinian land was promised to the Zionists, which was how the Jewish had interpreted it. ...read more.

The 14th of May 1948, the British finally gave up on the mandates and resigned the to the UNSCOP, United Nations Special Commission on Palestine. In conclusion the British mandates in Palestine where more a failure than a success. Although the British intentions were good the positive outcomes of the mandates were outweighed by the negative outcomes. There were other factors apart form British intentions that played a part in the mandates result. Britain as an empire had many self-interests, many of the things they did in Palestine, such as getting involved with Arab territory in the first place, was for self-interest and self-benefit. They offered their help to the Arabs because it was beneficial for them. If a non?biased organization had dealt with this territory, many of the clashes that occurred and still today, 50 years later, occur between these two communities wouldn?t have happened in the first place. Britain is not to be blamed for the consequences that these communities are still dealing with today. When the mandates where passed on to the United Nations, they resigned after a while as well, because there was too much tension and resentment between them, and this is the exact reason why Britain is not to be blamed for its failure, because no matter what or who dealt with these territories, there would have still been a big issue between them. They wanted the exact same piece of territory, so there was nothing to do. You can see the effects still today, almost 50 years after the initial clashes there is still problematic between this two countries. ...read more.