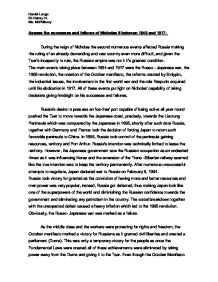 Assess the successes and failures of Nicholas II between 1849 and 1917:

Assess the successes and failures of Nicholas II between 1849 and 1917: During the reign of Nicholas the second numerous events affected Russia making the ruling of an already demanding and vast country even more difficult, and given the Tsar's incapacity to rule, the Russian empire was not it it's greatest condition. The main events taking place between 1894 and 1917 were the Russo- Japanese war, the 1905 revolution, the creation of the October manifesto, the reforms created by Stolypin, the industrial issues, the involvement in the first world war and the role Rasputin acquired until his abdication in 1917. All of these events put light on Nicholas' capability of taking decisions giving hindsight on his successes and failures. Russia's desire to possess an 'ice-free' port capable of being active all year round pushed the Tsar to move towards the Japanese coast, precisely, towards the Liaotung Peninsula which was conquered by the Japanese in 1895, shortly after such date Russia, together with Germany and France took the decision of forcing Japan to return such favorable peninsula to China. In 1898, Russia took control of the peninsula gaining resources, territory and Port Arthur. ...read more.

However, such reforms gave too little to the people which were still expressing huge discontent towards the government, furthermore, these reforms were made in a bad time frame as the revolution was already too close. The industrial situation during the early 1900s was on the verge of collapsing given the inflation and the social discontent, peasants and the main opposition parties began a wave of strikes, demonstrations and protests which led the ministers of the Tsar to fear an upcoming revolution, while Nicholas II had no initiative to prevent such event from occurring. Russia's involvement in WWI resulted in the opposite of what the Tsar expected; by going to fight on the front, Nicholas II hoped to enhance the people's support towards him and create a sense of patriotism which was with no doubt lacking from the Russian people. He hoped that such predicted support and trust towards himself would be enough to motivate Russian soldiers and win the war, but given his military inexperience his strategy resulted in a complete failure on all fronts. While the main ruler of the country had set off to war, Russia was ruled by the Tsarina who was heavily influenced by Rasputin. ...read more.

Another individual who played a relevant role in the ruling of Russia was the Tsarina, she believed in the ideologies of autocracy, she in fact pushed the Tsar to refuse political reforms like Witte's. The period which best demonstrates her incapability to rule a country is WWI, during which she was put in charge of domestic policy. The Tsarina didn't handle her task well: she dismissed ministers and supported Rasputin as her advisor who, as I previously stated, was even less capable of making the right decisions. Based on the results of Nichoas II's actions towards the Russian empire, it is safe to say that, overall, he failed as a ruler. He showed no capacity of understanding what his people wanted, and even once he did understand, he decided to refrain from assessing the situations and from improving the quality of the people's life, showing interest only for his own prosperity. The few successful changes made to Russian Empire have to be appointed to reformers like Witte, who were able to put the country back on track by putting aside the communist ideologies and acquiring the functioning capitalist attitude which was required to advance socially, economically and industrially. ...read more.