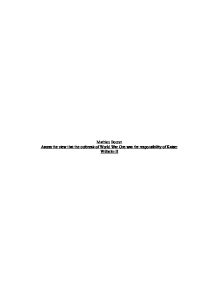 Mathieu Boutet Assess the view that the outbreak of World War One was the responsibility of Kaiser Wilhelm II gggg Kaiser Wilhelm II ascended to the throne in 1888 when he was only twenty-nine years old. Though, it is generally unclear how large a role the Kaiser actually played in leading Germany into the First World War with various views of which contrast from him only playing a slight role in the outbreak of war to the Emperor being a key individual responsible.1 There are many arguments from prominent historians that dispute over what degree Kaiser Wilhelm was responsible for the outbreak of World War One. However, many find it difficult to distinguish whether it was Wilhelm II's mismanagement of his government or the type of government itself, known as the Wilhelmine system. It was not solely the fault of Kaiser Wilhelm II which led to the start of the First World War but a mix between the Kaiser's personal ambitions and that of the government he created. The view that it was Wilhelm II's responsibility is generally a broad argument given the circumstances under which many other events took place, and the individuals that participated in them. ...read more.

Added to which, the Kaiser failed to negotiate a settlement with Britain where their diplomatic relations were unstable. Thus, this put Germany in a far worse state in terms of diplomatic relations not just with Britain but with Europe in general- France was no longer isolated from the negotiations of 1871-1890. This is seen as one of Wilhelm's most dire mistakes as it led to a chain reaction of events. The Duel alliance of 1894 between France and Russia ensured that if war were to break out, the Germans, much to Wilhelm's military advisers' dismay, would have to fight on two fronts. This would consequently leave them increasingly reliant on Austria-Hungary whose empire was nearing collapse. Because Germany became too reliant on Austria-Hungary, they became drawn into the crises in the Balkan region, and as a result plummeting them into an increasing conflict with Russia. In relation to Kaiser Wilhelm's personal ambitions and personality, it is clear that his desire for 'personal rule' along with the German constitution enabling him to have relatively all control over foreign affairs caused disastrous results. Wilhelm's desire to put Germany 'on the map' through military armament and his objective in creating a colonial empire brought the country into conflict with virtually every nation in Europe besides its unstable ...read more.

arguments of Zara Steiner, the German historian Fritz Fischer argues that the "elites" in control of the German government- Kaiser Wilhelm II and his military officials wanted war since 1912 and manipulated the Austrians into pursuing a conflict with Serbia after the assassination of Archduke. Fischer goes on to argue that it was the Kaiser's meddling which provoked the start of WWI.14 In conclusion, many of these arguments do not solely reflect the idea that the outbreak of the First World War was the fault of Kaiser Wilhelm II, but the collaboration of factors that contributed to the Kaiser's actions. Most noticeably, The Kaiser's Wilhelmine system is not easily distinguished from the Kaiser's personal role regarding the responsibility for the outbreak of World War One. Though the arguments are strong in suggesting that the Kaiser did play a rather large role in the years before the Great War; noticeably his plundering through the web of alliances left by the German Chancellor Bismarck and making radical decisions that sparked off a series of chained events. Through the arguments of the prominent Historians of World War One, it can be seen that the degree to which any entity, country, nation, group, or person, is responsible for the outbreak of the First World War is entirely arguable. ...read more.