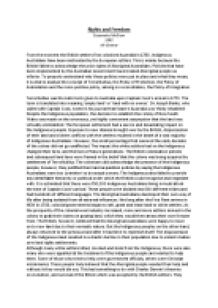 ﻿Rights and Freedom Cassandra McGraw 10R2 Mr Greene From the moment the British settlers first colonised Australia in 1788, Indigenous Australians have been mistreated by the European settlers. This is mainly because the British failed to acknowledge the prior rights of Aboriginal Australians. Policies that have been implemented by the Australian Government have treated Aboriginal people as inferior. To properly understand why these policies were put in place and what they mean, it is vital to analyse the concept of Terra Nullius, the Policy of Protection, the Policy of Assimilation and the more positive policy, aiming on reconciliation, the Policy of Integration. Terra Nullius was the Latin term given to Australia upon Captain Cook?s arrival in 1770. The term is translated into meaning 'empty land' or 'land with no owner'. Sir Joseph Banks, who sailed with Captain Cook, noted in his journal that Eastern Australia was 'thinly inhabited'. Despite the Indigenous population, the decision to establish the colony of New South Wales was made on the erroneous, yet highly convenient assumption that the land was virtually uninhabited. ...read more.

The Aboriginal Australians developed their own way of life after being isolated from all external influences. Not long after the First Fleet arrives in NSW in 1788, colonial governments began to sell, grant and lease land to white settlers. As the prosperity of the colonial wool industry increased, more and more settlers arrived in the colony to grab their claims on grazing land, which they would then amass their own fortune from. The British, however, believed that the Aboriginal Australians were happy to move on to new land due to their nomadic nature. But the Indigenous peoples on the other hand, always returned to the previous land after it had time to replenish itself. The dispossession of the Indigenous land resulted in a drastic decline in their population due to violent clashes over land rights settlements. Although many white settlers killed, mocked and stole from the Indigenous, there were also many who were appalled at the treatment of the Indigenous people and wanted to help them. ...read more.

Aboriginal people were convinced to move onto the islands off the Tasmanian coast. By 1847 the remnants of a number of Tasmanian Aboriginal groups were living on Flinders Island north of Tasmania. Their numbers totalled only just over 200. The settlers truly believed that they was doing the right thing by this, but far from living a free, traditional way of life, the Indigenous Tasmanian people were now living under guard, forced to wear clothes and learn Christianity. By 1847 all but 47 of them had died from disease and despair. The last of them died in 1869. Genocide had taken place in Tasmania at first because of the frontier war, but also as a result of the new protection policies. As with many other policies aimed to 'improve' the lives of Indigenous people, the instigators of the protection policy did not take into account the fact that the Aboriginal people saw nothing wrong with their way of life. They had lived in complete harmony with the land for thousands of years, and the only reason they were struggling now was because of the white settlers disrespecting their land and people. ...read more.