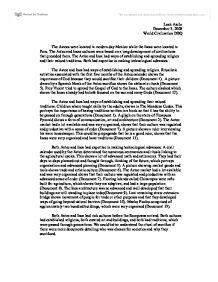 A glyph on the stairs of Tenayuca Pyramid shows a form of communication, art and architecture (Document 2). The Aztec market had a lot available and was very organized, shows that their culture was regulated and productive with a sense of order (Document 7). A picture shows a ruler interviewing his ware housekeeper. This could be propaganda that he is a good ruler, shows that the Incas were very organized and have traditions (Document 11). Both Aztec and Inca had expertise in making technological advances. A civil calendar used by the Aztec determined the numerous ceremonies and rituals linking to the agricultural cycles. ...read more.

The Inca architecture was so advanced and well developed that their buildings are still standing in place today(Document 9). Last remaining straw extension bridge shows movement of people for trade or other purposes and that they developed ways of going beyond natural barriers (Document 10). Machu Picchu comprised of approximately two hundred buildings, which were very organized (Document 13). Both Aztec and Inca had rich cultures before the Europeans arrived. Both cultures had established religions, both created art and buildings, and both had traditions, which were passed through generations. We could better understand the ritual of sacrifice if there were more documents detailing who was chosen for societies and why they sacrificed. Leah Aiello December 3, 2008 World Civilization DBQ ...read more.