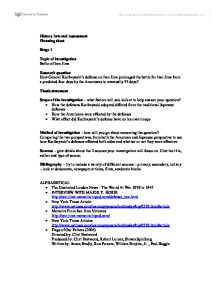 How General Kuribayashi’s defense on Iwo Jima prolonged the battle for Iwo Jima from a predicted four days by the Americans to eventually 35 days?

Scope of the investigation – what factors will you look at to help answer your question?

Method of investigation – how will you go about answering the question?

Comparing the two perspectives, from both the American and Japanese perspective to see how Kuribayashi’s defenses affected both sides and whether or not they were affective

Sources – give details about the 2 sources your investigation will focus on. Give the title, author and type of source.

This must be organized under headings – these will make up your topic sentences.

It must be referenced – make a note of the author, date of publication and page no.

In 1944, Iwo Jima had no strong fortifications as originally Japanese military advisors did not believe that American Forces would be able to push them back to their mainland, and defenses there were “as hazardous as a basket of eggs”. (Major Y. Horie, Page 3) General Kuribayashi was appointed on June 30th, 1944 for the defense of Iwo Jima from the foreign forces. Under General Kuribayashi, the Japanese defenses on Iwo Jima were designed so that tunnels were dug throughout the island, especially through the Mount Suribachi. (Flags of Our Fathers, Clint Eastwood) These tunnels were thirty five feet deep and made with concrete reinforced with volcanic ash which caused the naval bombardment which the American forces rained on Iwo Jima for three days prior to the invasion to be virtually useless as no casualties were caused. (Battle Fleet) Cut off from the mainland, and having no support from the Navy or the Air force as all aircraft were recalled to defend the mainland (Major Y. Horie, General Kuribayashi had strategically placed the pill boxes so that every angle or location on the island could be covered by Japanese artillery or machine gun fire, causing American forces to take heavy tolls as they receive gunfire from all angles. (Letters from Iwo Jima, Clint Eastwood) In the three months prior to the American invasion of Iwo Jima, 135 pillboxes were made in preparation for the defense of Iwo Jima. (Major Y. Horie, Page 8) Kuribayashi had planned to construct 26,000 meters of underground tunnels however by the time the Americans had arrived, only 5,000 meters had been dug, thus limiting the full extent of the Japanese defenses. Although weapons and supplies were in low supplies, Kuribayashi modified his weapons so they could suit multiple purposes. Anti-aircraft guns were doubled as anti-tank and artillery weapons to provide an offensive against airborne and land attacks. (Major Y. Horie report, Page 11) This defense was totally different to what the Americans were expecting as previously, Japanese defenses were based upon the beach, with barricades and trenches lined along the shore. As in previous battles the Japanese had mainly beach oriented defenses, Kuribayashi noticed that these defenses were quickly overrun, and instead, built numerous foxholes along the beach instead of trenches, allowing Japanese soldiers to lay in wait for the American soldiers to move their equipment onto the shore. (Flags of Our Fathers, Clint Eastwood) Under strict orders, Kuriyabashi forbade the men to fire upon any American forces after the three day Naval bombardment had begun in order to trick the Americans into believing that the bombing had managed to wipe out all Japanese forces. (Flags of Our Fathers, Clint Eastwood) Permission to fire was only given by Kuriyabashi himself when he thought the surprise attack on the Americans could inflict the maximum number of causualties. (Letters from Iwo Jima, Clint Eastwod) This strategic planning by Kuriyabashi allowed the Japanese forces to take the American forces by surprise as the American soldiers who were led to believe that Japanese troops had been annihilated were suddenly caught in a storm of machine gun and artillery fire.

“Each man should think his defense position as his graveyard, fight until the last and give many damages to the enemy.” (Major Y. Horie report, Page 10) This mentality which the Japanese soldiers all possessed caused them to fight with such passion and patriotism that it was the only instance in the Second World War that American casualties surpassed those of the Japanese, with the Japanese forces suffering just fewer than twenty thousand casualties and the US suffering over twenty five thousand casualties, making the battle of Iwo Jima the costliest in the Pacific. (New York Times) Of the twenty thousand Japanese men serving on Iwo Jima, only three hundred survived the battle, with most of them either putting up a fight to the very end or committing suicide to prevent capture. (Letters from Iwo Jima, Clint Eastwood) Some of the Japanese soldiers considered being captured by the American forces as being disgraceful and had decided to die honorable deaths by committing suicide by seppeku, grenades or guns. (Letters from Iwo Jima, Clint Eastwood) Due to the willingness of the Japanese to die for their country without hesitation, heavy casualties were inflicted on the American forces who struggled to take over the pillboxes the Japanese died to protect. The tunneling system designed by the Japanese allowed pillboxes that had been cleared previously by flamethrowers, to be accessed again by separate adjoining tunnels, giving Japanese troops the ability to fire on unsuspecting American soldiers when their backs were turned. (Flags of Our Fathers, Clint Eastwood) The Japanese resistance was so strong that the U.S. Navy Department described the battle for Iwojima as “the costliest single action of the Pacific War.” (Page 165, The World At War)