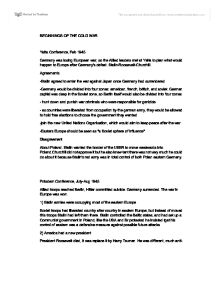 BEGINNINGS OF THE COLD WAR Yalta Conference, Feb 1945 Germany was losing European war, so the Allied leaders met at Yalta to plan what would happen to Europe after Germany's defeat. Stalin-Roosevelt-Churchill. Agreements -Stalin agreed to enter the war against Japan once Germany had surrendered -Germany would be divided into four zones: american, french, british, and soviet. German capital was deep in the Soviet zone, so Berlin itself would also be divided into four zones - hunt down and punish war criminals who were responsible for genicide - as countries were liberated from occupation by the german army, they would be allowed to hold free elections to choose the government they wanted -join the new United Nations Organisation, which would aim to keep peace after the war -Easters Europe should be seen as "a Soviet sphere of influence" Disagreement About Poland. ...read more.

America had a new president President Roosevelt died, it was replace it by Harry Truman. He was different, much anti- Communism and very suspicious of Stalin. 3) The allies had tested an atomic bomb the Americans successfully tested an atomic bomb at a desert site in the USA. At start the Postdam Conference, Truman informed Stalin about it. Disagreements In July there was an election in Britain, Churchill was defeated, so hald way through the conference he was placed by a new Prime Minister, Clement Attlee. There was rivalry and suspicion between Stalin and Truman. -They disagreed what to do about Germany. Stalin wanted to cripple Germany completery to protect the USSR against fututre threats. ...read more.

of eastern Europe that he was seeking.By 1946, Poland, Hungary, Romania, Bulgaria and Albania all had Communist governments which owed their loyalty to Stalin. Churchill described the border between Soviet- controlled countries and the West as an iron courtain. Stalin tightens his control With Communist governments established throughout eastern Europe, Stalin gradually tightened his control in each country. In oct 1947, Stalin set up the Communist Inf. Bureau, to coordinate the work of the Communist Parties of eastern Europe. This brought the leaders communist to Moscow to be briefed by Stalin and his minister This also allowed Stalin to keep a close eye on them. He spotted independent- minded leaders and replace them with people who were completely loyal to him. The only one who escaped this control was Tito in Yugoslavia. ...read more.