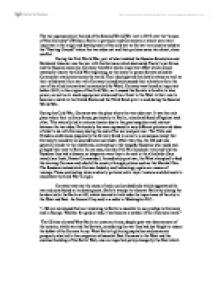 Berlin in particular and Germany as a whole were very important in the origin and development of the cold war as the war torn country acted as the Dueling Ground where the two sides met and their policies came into direct, close conflict.

The two superpowers at the end of the Second World War met in 1945 over the "corpse of Nazi Germany" (Walker). Berlin in particular and Germany as a whole were very important in the origin and development of the cold war as the war torn country acted as the "Dueling Ground" where the two sides met and their policies came into direct, close conflict. During the First World War, part of what enabled the Russian Revolution and Bolshevik takeover was the war with the Germans which decimated Tsarist loyal forces and the Russian economy. Germany therefore had an important effect which would eventually lead to the Cold War beginning, as the newly in-power Soviets called for Communist revolutions across the world. Their ideology and this hostile stance as well as their withdrawal from war with Germany immediately caused their alienation from the rest of the allied international community (the West). Germany was therefore important before 1945, in the origins of the Cold War, as it caused the Soviets to be able to take power, as well as to reach superpower status and be a threat to the West ...read more.

As General Clay said in a cable to Washington D.C.: "...We are convinced that our remaining in Berlin is essential to our prestige in Germany and in Europe. Whether for good or bad, it has become a symbol of the American intent." The US also allowed West Berlin to create an Army, despite post-war disarmament of the country, which worried the Soviets, considering the war they had just fought to ensure the defeat of the German Army. West Berlin's glittering capitalism and economic prosperity also led to the emigration of essential East Germans to the West and the eventual building of the Berlin Wall, also an important policy change by the East which shows the importance of the country to the USSR and therefore the continuing development of the Cold War. Kennedy even made speeches promising his support to the West Germans in Berlin itself to show his convictions. Before the Wall was built, a major confrontation occurred between Soviet and US military forces, as tanks from both sides faced off along the main street connecting the West and East sections of Berlin. ...read more.

Given that Germany and WW I are largely to blame for the Soviet government coming to power, Germany is very important to the orthodox point of view. Post-revisionists, such as John Lewis Gaddis, on the other hand tend to be more balanced between blaming the West as opposed to the USSR. Germany is still important to their point of view, being more balanced, as it is a good location from which to address the actions of both sides coming into close conflict with each other. Revisionists tend to be a lot more critical of the Western powers, and focus on their actions, many of the most controversial of which took place outside of Germany. Therefore, Germany being very important in the origin and development of the war is represented best by these two schools of thought, orthodox and post-revisionist. In conclusion, while there are other important factors in the origin and development of the Cold War, Germany is still essential in both the origin and the development as the place where forces met and where the line in the sand between dueling superpowers was drawn. ...read more.