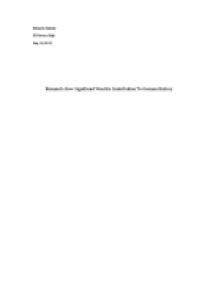 Bismarck: How Significant Was His Contribution To German History?

However, Germany won the war by incomparable measures. Proving that Bismarck took time to plan the war and knew it was a suitable option to unite Germany as historian Eyck would argue. Many historians discredit the results of Bismarck?s policies. Historians such as Abrams states that Bismarck ?left a legacy of unresolved problems? and others such as Pflanze would argue that nothing Bismarck established survived World War II except the social insurance system (which he disdained). The Kulturkampf against the Catholic Church power was a key example when Bismarck didn?t obtain the result he would have wanted. Bismarck who was quite narcissist, disliked the fact of a German owing alliance to someone other then the Kaiser (Kitson). ...read more.

Later, Bismarck able to establish the Three Emperors League and was able to form an alliance with Austria. Bismarck proved to be an efficient ruler and it is evident that Bismarck accomplished a lot throughout the 1871 German unification, and through his domestic and foreign policies 1871-1890. Despite the fact that that the majority of his accomplishments did not remain permanent (short term) and some occurred due to luck, it is satisfactory to state that his establishments paved the road for a more sustainable Germany. Conclusively, for historians to not consider and discredit Bismarck for obtaining a reasonable contribution to German history would be an injustice to all that Bismarck achieved as a political leader for Germany. ...read more.