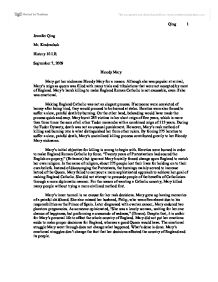 Jennifer Qing Mr. Kindrachuk History 10 I.B. September 7, 2009 Bloody Mary Mary got her nickname Bloody Mary for a reason. Although she was popular at arrival, Mary's reign as queen was filled with many trials and tribulations that were not accepted by most of England. Mary's harsh killing to make England Roman Catholic is not excusable, even if she was emotional. Making England Catholic was not an elegant process. If someone were convicted of heresy after being tried, they would proceed to be burned at stake. Heretics were also forced to suffer a slow, painful death by burning. On the other hand, beheading would have made the process quick and easy. ...read more.

Mary's initial objective for killing is wrong to begin with. Heretics were burned in order to make England Roman Catholic by force. "Twenty years of Protestantism had soured the English on popery," (Britannia) but ignorant Mary brutally forced change upon England to match her own religion. In the name of religion, about 275 people lost their lives for holding on to their own beliefs. Instead of discouraging the Protestants, the burnings mainly served to increase hatred of the Queen. Mary failed to carryout a more sophisticated approach to achieve her goal of making England Catholic. She did not attempt to persuade people of the benefits of Catholicism through a more diplomatic manner. ...read more.

Despite that, it is unfair for Mary's personal life to affect the whole country of England. Mary did not put her emotions aside to make proper decisions for England, whereas a good Queen would have. The emotional struggle Mary went through does not change what happened. What's done is done. Mary's emotional struggles don't change the fact that her decisions affected the country of England and its people. By cruelly burning heretics, Mary forced Protestants out of England. Mary's irrational ruling cannot be solely blamed on her unfortunate circumstances. Queen Mary can only blame herself for what she brought on herself. She caused bloodshed in England throughout her short five year reign. During the reign of Elizabeth, Mary was righteously given her nickname, Bloody Mary. ...read more.