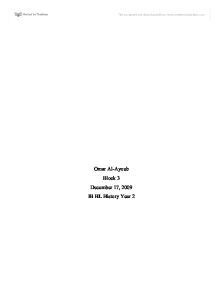 Omar Al-Ayoub Block 3 December 17, 2009 IB HL History Year 2 The years of 1917 to 1953 marked the Bolshevik era of Russia. In this period, Russia was to go through drastic political, social, and economic change, under the rule of two political figures, Vladimir Lenin and Joseph Stalin. In its pre-Revolutionary years, Russia had been in evident economic desperation and political instability, appearing as a backwards nation in the midst of an advancing western Europe. Lenin and Stalin, both brought apparent accomplishments to Russian society in their years of rule, in which Russia, as a country, grew out of the incapacities that had until then diminished it's status. Yet, examining the essence of Bolshevik power in Russia, it becomes clear that in establishing evident economic and political advancement, other aspects of society were totally neglected. Lenin and Stalin led Russia, on a social level, through a harsh era that primarily exploited the Russian people as a whole. Indeed the Bolsheviks seemed to diverge immensely from the fundamentals of communism, and though claimed to work in benefit of the people, ended up destroying them. Lenin and Stalin were mainly concerned with the establishment of their dictatorship, through whatever means possible needed to eliminate opposition. Thus, although successful strictly in the sense of Russian industrialization and political stability relative to its state before these two figures, the Bolsheviks led the Russian people into wretched lifestyles that were not resolved during the regime. In other words, what was accomplished by Lenin and Stalin appears minimal compared to the humanitarian at which done. Leninism gave way to Stalinism, and Russia was bound to follow the absolutism of their policies for fifty years of an unreliable government. After the abdication of the tsar in March 1917, the Provisional Government, made up of the Duma and the Petrograd Soviet took control of the Russian government. Though the tsarist regime had been eradicated, the same problems remained in Russian Society: economic failure, famine, political unrest, and a government incapable of dealing with such issues. ...read more.

It has been argued, that the NEP would not have managed to sustain consistent economic growth after 1924 and perhaps caused a state of economic stagnation, "On the other hand, we do not believe that NEP was capable of sustaining much higher rates of industrialization than those achieved on the eve of the first world war." ( Davies) Perhaps the most backwards feature of Lenin's regime was his failure to execute the concepts of socialism. Lenin established a dictatorship in Russia that therefore did not release it from the 'absolute power' that it had manifested during the revolutions. While the Soviet regime initially claimed to be based on the principles of Karl Marx, dictatorial regime was clearly not approved by Marxist ideology. In fact the NEP diverged totally from the essence of socialism, and did not even come close to providing the Russian people with their hopes of a utopian communist state. As Karl Marx called for the elimination of the state and the rise of the proletariat, Russia's government set up in it's Bolshevik years seemed to have only secured the control of the state and enhanced the oppression upon the working class, "Far from 'withering away' as Marx had envisaged, the state had become all-powerful. Lenin had replaced one dictatorship with another." (Tarr, 36) It seemed that Russia was living a 'modern-past' in which the ruler had changed, but concepts had not. The establishment of the socialist state, at least under Lenin, possibly served as a veil to cover the true motivations of lust for power. The aims of Communism appeared to fail under Lenin, for the aim to eliminate class struggle, only furthered its existence. Politics and economics set aside, Lenin's regime was essentially socially detrimental to the Russian people. Lenin's struggle to fight opposition was to mark the beginning of a violent and bloody era in Russian history that would then be continued under Stalin. ...read more.

Furthermore, anybody who seemed at the least suspicious of even questioning Stalin's policies was quickly executed, or sent to the Gulag, the concentration camps in which people were killed and tortured. By the end of Stalin's regime, millions of people had died without any justification, "Ninety-nine per cent of Stalin's victim's, however, were innocent of any opposition to the Soviet system and were actually loyal Soviet citizens." (Lee, 54.) Stalin also carried show trials, in which is publicly accused innocent people, to settle terrorizing atmosphere that would further ensure the absence of mere opposition, The show trials dealt with these potential threats by magnifying the charge against them. They had to die as traitors, as perpetrators of crimes beyond the reach of reason...Only then could Stalin be sure that their execution would provoke no dangerous revulsion. (Lee, 55.) Stalin's purges represented a severe morale assault that would haunt Russian people for even after the end of his rule. In effect, the final result of Stalin's regime was a deteriorated and terrorized nation that had suffered from the failure and obsession to create a socialist dictatorship. . In conclusion, it is clear that the accomplishments brought out by Lenin and Stalin were only superficial, and did not benefit Russia in the long-run. True, both of them contributed to saving the country from its shaming backwardness, and put it at the same level as the developing countries of Western Europe, but the destructive cost at which this was achieved, was highly more significant. Stalin's era is often regarded as a homicide of innocent civilians who found themselves faced to a tyrannical government that completely neglected the life of the conditions of their lives. At the end, Russia was a world power, but that had been through tremendous, and unforgettable sufferance. Whilst the tsarist revolution had awoken hope in the minds of the Russians, the Bolsheviks came with an objective strictly reserved to power, bringing Russia not very far from the state it was before the revolutions hit. ...read more.