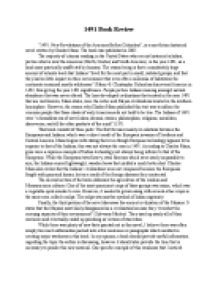 Book Review of 1491: New Revelations of the Americas Before Columbus, written by Charles Mann

﻿1491 Book Review ?1491: New Revelations of the Americas Before Columbus?, is a non-fiction historical novel written by Charles Mann. The book was published in 2005. The majority of citizens residing in the United States who are not historical scholars, picture what is now the Americas (North, Central, and South America), in the year 1491, as a land mass practically unaffected by humans. The reason being is that a considerably large amount of schools teach that Indians ?lived for the most part in small, isolated groups, and that they had so little impact on their environment that even after a millennia of habitation the continents remained mostly wilderness" (Mann 4). Christopher Columbus discovered America in 1492, thus giving the year 1491 significance. People picture Indians roaming amongst natural abundance that was never altered. The lone-developed civilizations that existed in the year 1491 that are well known, Mann states, were the Aztec and Mayan civilizations located in the southern hemisphere. ...read more.

It states that the Mayans most likely disappeared as a civilization because they ?overshot the carrying capacity of their environment? (Sylvanus Morley). They used up nearly all of their resources and eventually ended up perishing as victims of starvation. While there was plenty of new facts pointed out in this novel, I believe there was often simply too much information packed into a few sentences or paragraphs which resulted in creating major weakness in this book. In my opinion, a book should provide useful information regarding the topic the author is discussing, however it should also provide the time that is necessary to ponder this new material. One specific example of this weakness that I noticed while reading ?1491? occurs when Charles Mann discusses the theory that Indians first appeared in America after crossing the Bering Straight land bridge. ?C. Vance Hayes, an archaeologist at the University of Arizona, put the crowning touches on the scheme in 1964, when he noted evidence that at just the right time?that is?about thirteen thousand years ago?two great glacial in Northwest Canada parted, leaving a comparatively warm, ice-free corridor between them? (17). ...read more.

Mann depicts a type of bean he picked while in the rainforest, ?He plucked what looked like a four-foot string bean from a branch, split it lengthwise, and showed me flattened, shiny seeds arrayed along its length like teeth in a jaw? (343). What could be described as simply an elongated green bean found in the forest, is transformed with imagery into a ?four-foot string bean? with ?flattened, shiny seeds arrayed along its length like teeth in a jaw?. If this book had not been filled with picturesque details and imagery, it would have been significantly less appealing. Overall, I would recommend this the book ?1491? by Charles Mann for others. I thought it was full of new facts and material relating to the Americas that was completely new to myself and most likely other readers. It contained plenty of vivid description that could keep anyone engaged. Mann does a superb job of entertaining the reader and demonstrates that there was far more to the world prior to Columbus than anyone would have imagined. ...read more.