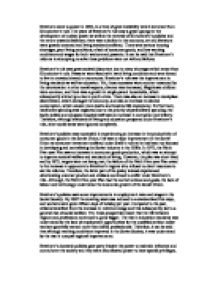 Brezhnevs rule saw the improvement in living standards as well as education. Yet, these successes were counter-measured by the deterioration in other social aspects

Brezhnev came to power in 1964, in a time of great instability which stemmed from Khrushchev's rule. The years of Brezhnev's rule saw a great upsurge in the development of nuclear power as well as the reversal of Khrushchev's policies and the return towards Stalinism; there was a decline in the economy, art and literature were greatly censored and living standards suffered. There were serious housing shortages, poor living conditions, a lack of consumer goods, and low working conditions and wages for both workers and peasants. It can be said that Brezhnev's reforms in attempting to solve these problems were not without failures. Brezhnev's rule saw great societal discontent due to many shortages which arose from Khrushchev's rule. Peasants were faced with harsh living conditions and were forced to live in crowded shared or communes. Brezhnev's rule saw the improvement in living standards as well as education. Yet, these successes were counter-measured by the deterioration in other social aspects; divorce rates increased, illegitimate children were common, and there was a growth in single-parent households, which subsequently stirred up a rise in youth crime. ...read more.

Yet, these prosperities meant that the rife between regions and professions continued to grow bigger. The rise in education standards was undermined by the lack of employment oppurtunities for the qualified as blue-collar workers generally earned more than skilled professionals. Therefore, it can be said that although working conditions improved in the Soviet Society, it was undermined by the rise in unequal regional improvements. Brezhnev's domestic policies gave party leaders the power to maintain influence and control over the society and they were also allowed power to have special privileges, which angered the population and saw a growth in black markets. This meant that Brezhnev's policies experienced great regional divisions and inequalities - whilst wages, living standards and employment opportunities prospered in some and stagnated in others. The great improvement in working conditions of some areas attracted many labour to migrate. Subsequently, this saw a general decline of labour in stagnated towns and overcrowding in wealthier towns, which further amplified the gap between the rich and the poor regions. Therefore Brezhnev's promise of 'Developed Socialism' had been further undermined by the unequal regional successes in living and working conditions. ...read more.

The conference saw moderate progress in reducing internal tension and also its external tension; thus, this period experienced some hope for the end of the Cold War. Therefore, in certain parts of the Soviet Union, the general standard of living and working conditions prospered in Brezhnev's era: there were improvements in housing levels progressed, as well as education. The Ninth Five-year plan attempted in increasing the availability and quality of consumer goods, and although the policy seemed successful in the first five years, the policy backfired and failed to transform the structure of the Soviet society. Soviet citizens also prospered from a general improvement in wages, working benefits and a rise in living conditions. However, these successes were undermined by the increase in inequalities and divisions between regions. The improvements in living standards also backfired and instead saw an increase in widespread social unrest such as alcoholism, crime and divorce. Although, Brezhnev's policies attempted to transform and to modernize the structure of the Soviet Union, his social reforms did not succeed is solving the many social problems in the Soviet Union. ...read more.