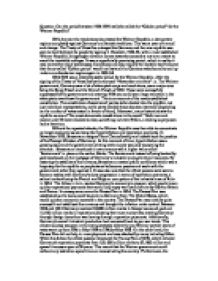 Can the period between 1924-1929 really be called the Golden period for the Weimar Republic?

Question: Can the period between 1924-1929 really be called the "Golden period" for the Weimar Republic? 1919, the year the revolutionaries created the Weimar Republic, a democratic regime completely against Germany's militaristic traditions. This was a year of turmoil and change. The Treaty of Versailles outraged the Germans and the new republic was seen to have betrayed its people by signing it. However, 1924-29, with a more established Weimar Republic, things began to take a course towards success but not to an extent to avoid the inevitable collapse. It was a superficially promising period, which in reality it was marred by major weaknesses. Conditions and also majorly the republic itself ensured that the so-called 'Golden period' would not last and the Germans were bound to end up under an authoritarian regime again in 1933-34. 1924-1929 was a relatively stable period for the Weimar Republic. After the signing of the Treaty of Versailles by the accused "November criminals" i.e. The Weimar government, Germany saw a lot of attempted coups and revolutions, some major ones being the Kapp Putsch and the Munich Putsch of 1923. These were successfully suppressed by the government and entering 1924 one could see a large reduction in the attempts to overthrow the government. This is on account of the newly established constitution. The constitution allowed small parties to be elected into the republic, not just individual representatives, as the party decided these deputies internally [depending on the number of votes casted in favour of them]. ...read more.

To begin with, there was the constitution. Firstly, the proportion of representation from each party was so little that it was impossible for one party to come to power thus creating confusion and delays in decreeing laws due to the diversity in views. This disorganisation led to there being 6 different Chancellors during the period of 1924-28, each pertaining their own different ideologies in terms of law and order. Along with a Chancellor the Weimar Republic had a President. Article 48 allowed the President immense power to govern creating an almost dictatorial regime. If the President was not pleased the Chancellor, he had the power to remove him from position and appoint someone of his wishes. This meant that the government was restricted to the President's ideologies, which further restricted free will and democracy, for example, Hindenburg, who was appointed as President in 1925, was a strict conservative rightist and therefore Germany remained mostly a strict rightist country under his power. In 1930 Hindenburg appointed Bruning as chancellor and agreed to sign 'presidential emergency decrees' under Article 48 if the government faced opposition in the Reichstag. Therefore, under Hindenburg's governing and Bruning's chancellorship the government no longer functioned democratically as Bruning relied on the president's emergency powers to push through the legislation he desired. Hindenburg's policies were collapsing the German democracy as he represented an abuse of the constitution's emergency powers, which were initially meant to protect the democratic functioning of the constitution, not to disrupt it. Moreover, Hindenburg's failing energy and senility (he was 85 when he got re-elected in 1932) ...read more.