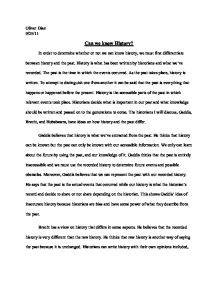 Can we know history?

Oliver Diaz 9/25/11 Can we know History? In order to determine whether or not we can know history, we must first differentiate between history and the past. History is what has been written by historians and what we've recorded. The past is the time in which the events occurred. As the past takes place, history is written. To attempt to distinguish one from another it can be said that the past is everything that happens or happened before the present. History is the accessible parts of the past in which relevant events took place. Historians decide what is important in our past and what knowledge should be written and passed on to the generations to come. ...read more.

This shows Gaddis' idea of inaccurate history because historians are bias and have some power of what they describe from the past. Brecht has a view on history that differs in some aspects. He believes that the recorded history is very different than the raw history. He thinks that raw history is another way of saying the past because it is unchanged. Historians can write history with their own opinions included, which obviously changes history. Brecht believes that history is more general and depicts only main events that should be passed on. He also thinks that history is limited because of faulty historians. Textbooks are written by many historians and even though history cannot drastically change without being noticed, the historians can alter facts throughout history. ...read more.

Also, he says that because of all the untouched information we still have regarding the past it is unlikely we will be able to decipher all of it accurately. Otherwise, he thinks the past is unknown to us and the best we can do is try and piece together an accurate history with the recorded information we have. These historians believe that our history can be known to an extent. The past is the overall group in which history falls into. Gaddis believes that our past will be represented by the history we've written. Then, Brecht believes that our history is general and doesn't accurately depict our past. Last of all, Hobsbawm thinks that history will always be indefinite because of our lack of accurate information and our inability to retrieve it. ...read more.