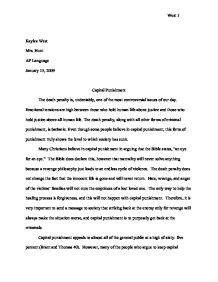 Kaylee West Mrs. Hunt AP Language January 15, 2009 Capital Punishment The death penalty is, undeniably, one of the most controversial issues of our day. Emotional tensions are high between those who hold human life above justice and those who hold justice above all human life. The death penalty, along with all other forms of criminal punishment, is barbaric. Even though some people believe in capital punishment, this form of punishment truly shows the level to which society has sunk. Many Christians believe in capital punishment in arguing that the Bible states, "an eye for an eye." The Bible does declare this, however that mentality will never solve anything because a revenge philosophy just leads to an endless cycle of violence. The death penalty does not change the fact that the innocent life is gone and will never return. Hate, revenge, and anger of the victims' families will not cure the emptiness of a lost loved one. The only way to help the healing process is forgiveness, and this will not happen with capital punishment. Therefore, it is very important to send a message to society that striking back at the enemy only for revenge will always make the situation worse, and capital punishment is to purposely get back at the criminals. ...read more.

Mentally ill people may even be put to death in death penalty trials, for example in the Penry v. Lynaugh case. This is not fair to the mental because they are simply born with these defects to their brain that cause them to act certain ways. Johnny Paul Penry, a man who was mentally ill and abused as a child, killed and raped Pamela Carpenter. Even though it is technically unconstitutional as stated in the 8th Amendment of "cruel and unusual punishment," to put a mentally ill person to death, Johnny Paul Penry was sentenced to death ("Overview of Penry v. Lynaugh"). Capital punishment is also barbaric, cruel, and violates the Bill of Rights in the "cruel and unusual" clause. No matter what it is whether it is a firing squad, electrocution, gas chamber, lethal injection, or hanging it is horrible to have a crowd of people standing around watching. U.S. citizens criticize people like Saddam Hussein and Adolph Hitler who murdered their own people, but the death penalty is basically the same concept. Prison life is a far worse punishment and more sufficient restriction. ...read more.

However, Troy Davis was the culprit and in 1991, he was sentenced to death in murdering a policeman. After Troy Davis was executed DNA tests showed that he was not the criminal in this horrific crime therefore the police got rid of all the evidence ("Reasonable Doubt"). Another possibly innocent person convicted of a crime was Edith Thompson of Great Britain, who was thought to have killed her husband, Percy. She was thought to be guilty along with a suspected lover, Frederick Bywaters. The love letters she wrote to Bywaters were considered "proof" as a motive to kill her husband. After she was executed, her case was reconsidered and she was found innocent. The case of Edith Thompson was the primary reason capital punishment was abolished in England (Bland). There are many more cases where innocent people have been executed, this is proof that are justice system has many flaws. Punishment is supposed to be for the protection of society and for the reformation of the wrongdoer. It purports to protect society by preventing the same criminals from repeating their crimes and by acting as a deterrent to other prospective criminals. However, in these respects capital punishment is a notorious failure. WORDS: 961 ?? ?? ?? ?? West 1 ...read more.