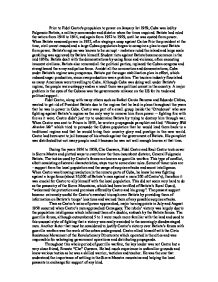 Prior to Fidel Castro's propulsion to power on January 1st 1959, Cuba was led by Fulgencio Batista, a military commander and dictator when the times required. Batista had ruled the nation from 1940 to 1944, and again from 1952 to 1959, until he was ousted from power. When Batista assumed power in 1952, after staging a coup against Carlos Prio the president at the time, civil unrest ensued and a large Cuban population began to conspire a plan to oust Batista from power. Batista's regime was known to be corrupt - mobsters ruled the island and large scale gambling was approved by Batista himself. Student riots against Batista became common in the mid 1950s. Batista dealt with the demonstrations by using force and violence, often executing innocent civilians. Batista also removed all the political parties, replaced the Cuban congress and strengthened the army and police force. Amidst all the commotion and demonstrations, Cuba under Batista's regime was prosperous. Batista put the sugar stabilization plan in effect, which reduced sugar production, since overproduction was a problem. The tourism industry flourished as many Americans were travelling to Cuba. Although Cuba was doing well under Batista's regime, the people were unhappy and as a result there was political unrest in the country. ...read more.

Throughout this whole period of guerrilla warfare, the key leader was not Castro but a very close friend, Ernesto "Che" Guevara. He had much experience in unfamiliar grounds and knew various tactics as he was a skilled warrior, tactician and teacher. He was the one that understood the importance of settling in the Sierra Maestra mountains and helping the local peasants in exchange for support of any kind. Castro chose guerrilla warfare over many other possible ways firstly because of his ideology of independence; he could not use the Cuban army and certainly not on any external country's army(the negotiations between Batista and Cosme de la Torriente, "El dialogo civico" had ended in the failure of political groups to find a peaceful solution, so peaceful attempts were largely out of the question).. He wanted it to be a revolution led by his future people, a key for their future support in his dreamed government. In addition to this, the USA's policy of placing an arms embargo on Cuba greatly decreased the morale of the army and raised hopes in Castro's men as they knew that without the American spare parts, the Cuban army would not be able to function properly. Also guerrilla warfare kept the state of Cuba in a mild turmoil during these revolutionary years and greatly helped in meddling up Batista's priorities. ...read more.

He was both a nationalist and socialist and had some Marxist and Leninist ideas. At first he was sure to isolate himself from anything that could be assumed as a communist revolution, although he was eventually left with no choice but to declare it communist to gain soviet support in the years that would follow. So indirectly his ideology helped make the revolution what it was. It could also be argued that the policies of the USA actually allowed the Revolution to happen. During the early stages of Castro's rise to power, the USA was not supporting a clear side. It supported both forces: General Fulgencio Batista by sending planes to Cuba in order to exterminate rebel forces, and indirectly Castro. In response to talks between Castro's allies and US government ministers, Castro joined his 26th July movement with the Orthodox party to give an international gloss to his actions, a "civic revolutionary front". Still the US kept supplying weapons to Batista but in an insufficient number that would have never allowed him to win through a military victory. Also, the USA were increasingly despairing of Batista's corruption (for example he "cleared" peasants who were supporting Castro) that for some influential Americans, Castro was looking like a viable, and preferable, alternative. If the USA could have acted to prevent the Castro Revolution, they did not. ...read more.