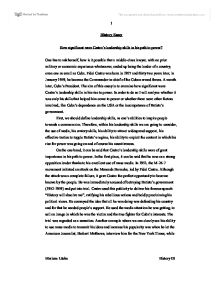 History Essay How significant were Castro's leadership skills in his path to power? One has to ask herself, how is it possible that a middle-class lawyer, with no prior military or economic experience whatsoever, ended up being the leader of a country, even one as small as Cuba. Fidel Castro was born in 1927 and thirty two years later, in January 1959, he became the Commander-in-chief of the Cuban armed forces. A month later, Cuba's President. The aim of this essay is to examine how significant were Castro's leadership skills in his rise to power. In order to do so I will analyze whether it was only his skills that helped him come to power or whether there were other factors involved; like Cuba's dependence on the USA or the incompetence of Batista's government. First, we should define leadership skills, as one's abilities to inspire people towards a common aim. Therefore, within his leadership skills we are going to consider, the use of media, his oratory skills, his ability to attract widespread support, his effective tactics to topple Batista's regime, his ability to exploit the context in which his rise for power was going on and of course his assertiveness. On the one hand, it can be said that Castro's leadership skills were of great importance in his path to power. ...read more.

All in all, it can be said that Castro's leadership skills were of extreme significance and importance in his path to power because if it weren't for them, Castro would have had a hard time in gaining the people's support to achieve his aims. On the other hand, it can be said that although Castro's leadership skills were significant in his rise to power, there were other factors involved that also helped him bring Cuba under his domination. For example, the economic, social and political conditions were also important in Castro's rise to power. Cuba's dependence on the USA: American political and economic control and its effects brought enormous changes to Cuba's socio-economic structure. Since 1898, the USA began a formal military occupation on the island and although in 1902, there was transference of government from the Americans to the Cubans, through Platt Amendment, issued in 1903, the USA still had the right to intervene the country "in case of crisis". The USA claimed they intervened to protect their independence, but truly they had their own economic interests. This made the Cubans feel the Amendment as an instrument of domination and arouse nationalistic feelings. In the search to really become independent they started looking at the one person who promised to get it: Fidel Castro. What is more, USA's intervention in the Cuban economy encouraged the formation of a rich Cuban elite with no sense of national identity. ...read more.

I believe that it was a combination of his qualities and skills and the historical conditions that helped him and his supporters succeed. Castro wouldn't have been able of accomplishing that much if it weren't for his excellent use of the media, powerful oratory, his tactics, determination, etc. nor would he have been able to do so without the helped provided by the unstable situation at that time. Both, historical condition and leadership skills compliment each other. It was the combination of both that turned Castro into Cuba's dictator. 1 After he was released from prison, Castro escaped to the jungle of Sierra Maestra in the Oriente. 2 He proposed a social programme that would recover national pride, become a strong independent country with no foreign intervention and people to have egalitarian rights. 3 He talked about introducing changes in the education and health system, dealing with land distribution and corruption. 4 Was written in the form of document in 1953. 5 In May 1955, Batista granted Ra�l and Fidel Castro a political amnesty, in order to improve his image and regain support. 6 Fulgencio Batista came to power in 1933 as a result of a coup d'�tat. He had no experience in government, economics or administration and no desire to promote a social revolution. He went along with business interests and the USA. ?? ?? ?? ?? 1 Marlene L�cke History IB ...read more.