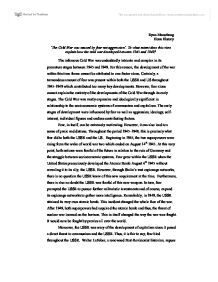 Ryan Marschang Hons History 'The Cold War was caused by fear not aggression'. To what extent does this view explain how the cold war developed between 1945 and 1949? The infamous Cold War was undoubtedly intricate and complex in its premature stages between 1945 and 1949. For this reason, the development of the war within this time frame cannot be attributed to one factor alone. Certainly, a tremendous amount of fear was present within both the USSR and US throughout 1945-1949 which contributed too many key developments. However, fear alone cannot explain the entirety of the developments of the Cold War through its early stages. The Cold War was vastly expansive and ideologically significant in relationship to the socioeconomic systems of communism and capitalism. The early stages of development were influenced by fear as well as aggression, ideology, self-interest, individual figures and endless contributing factors. Fear, in itself, can be extremely motivating. However, it can also lead to a sense of panic and distress. Throughout the period 1945-1949, this is precisely what fear did to both the USSR and the US. ...read more.

This fear dragged the US to push through the Truman Doctrine on the 12th of March 1947, shifting the US foreign policy from isolation to intervention and containment. In addition, the Marshall Plan on the 5th of June 1947 developed alongside the Truman Doctrine, providing an economic aspect to the new policy. Fear drove developments to urgently push economic recovery in Europe and to fund anti-communist regimes. In fact, eventually the Marshall Plan would lead to the dissemination of over $17 billion in a four year period. This argument is bolstered by the Revisionist historians Gabriel and Joyce Kolko, who believed American policy was determined by fear of another world recession. In essence, fear fed the US's pursuit for world security. Yet, fear alone cannot justify all of the developments between 1945 and 1949. In addition to fear, the aggressive nature of both the USSR and US had tremendous influence on the development of the war. First of all, Orthodox historian Arthur M. Schlesinger argues the Soviets were inevitably expansionist in nature, as in accordance with their advocacy of the need to spread revolution. ...read more.

As a matter of fact, post- Cold War historians such as John Lewis Gaddis argue individuals had a large impact on the development of the Cold War. Gaddis even pushes by stating if Stalin was eliminated from the war, the war would not even have occurred. These factors are necessary in justifying events in the Cold War which simply were not caused by fear or aggression alone such as the Molotov Plan and COMECON which were reactions to previous actions by the U.S. Therefore, as seen, with a war as expansive and intricate as the Cold War, fought by proxies all over the world, fear alone cannot explain the developments of the war regardless of the time frame. However, to a limited extent, fear had a significant role to play within the crafting of the Cold War. Furthermore, aggression, by itself, does not provide entire justification for the developments of the Cold War. Yet, instead it was an amalgamation of a variety of individuals, policies and ideologies. The development of the Cold War would continue to be driven by microcosms, due to its expanse, until its demise in 1991. ...read more.