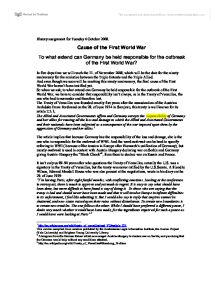 Cause of the First World War

The naval race between can also be held as an argument, since it gives us an impression of Germany's attitude towards Britain. The German government had led them influence by an American writer, Alfred Manhan, who believed that the only way to a great empire was through sea power. It therefore worried Germany that Britain navy was that bigger than hers, ex. source D table 2.1 on page 19 in the book Mastering Modern World History, third edition.4 Is naval statistics which shows Relative strengths of Germany and Britain in battleships and Dreadnoughts, 1907-11, and if we look under the 1907 we can see that Britain has over twice as many battleships as German, though Germany has three more in under construction than Britain, and when we look under dreadnoughts (a battleship which was constructed by Britain and introduced in 1906, and made all other battleships seem obsolete) Britain had one and Germany none, and under construction Britain had three and Germany four. This information can easily be applied on Admiral Tripitz's Navy Law of 1897 which should make the Germany expanding its navy, and as you can see in the table Britain are leading, but Germany is making an effort to compete with Britain. And at 1914 the new German navy could only mean one thing to the British, that Germany intended to make war out of the naval rivalry between the two countries. A different argument which goes further back than the two others is that the Bismarckian System ruined some kind of invisible peace settlement in Europe when it started to "unite" Germany. ...read more.

Ex. naval race, Bosnia, territory, etc. It can be interpretated as the European empires all had gained their colonies, their industrialisation and their power, but at last they couldn't find room for each other. The industrialisation had increased the effectiveness of all the empires, and no one stood back as the loser, therefore they needed to find one, by war, the first "total war". And even though they had found their loser at the Treaty of Versailles the winning empires was greedier than ever. As a result of the treaty Germany's territory was reduced by about 13%, and it had to pay an enormous war indemnity in the time of seventy years. And to conclude, the Versailles Treaty filled everybody's mouths, but one nation didn't achieve as much, the U.S. Mainly because of Wilson's believe in "victory without victory", in his opinion they didn't need to take all resources away from Germany to show who won. But I believe that the question; to what extent can Germany be held responsible for the outbreak of the First World War? Will stay an unanswered question. 1 http://en.wikisource.org/wiki/treaty_of_versailles/part_VII#article_231 This version complied from versions published by the Australasian Legal Information Institute, the Avalon Project (Yale University) and Brigham Young University Library. 2 A telegram from the German Kaiser which encouraged Austria-Hungary to declare war on Serbia, and promising that the Germans would help without any conditions attached. 3 http://en.wikipedia.org/wiki/Treaty_of_Versailles#Shandong_Problem 4 Mastering Modern World History, Third edition by Norman Lowe, from Palgrave, Source D, page 19, table 2.1 under War and international relations, part 1. source of that; R. Wolfson, Years of change (Arnold, 1978) ?? ?? ?? ?? ...read more.