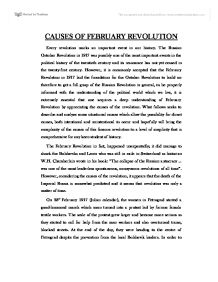 Cause of the Russian February Revolution

CAUSES OF FEBRUARY REVOLUTION Every revolution marks an important event in our history. The Russian October Revolution in 1917 was possibly one of the most important events in the political history of the twentieth century and its resonance has not yet ceased in the twenty-first century. However, it is commonly accepted that the February Revolution in 1917 laid the foundation for the October Revolution to build on therefore to get a full grasp of the Russian Revolution in general, to be properly informed with the understanding of the political world which we live, it is extremely essential that one acquires a deep understanding of February Revolution by appreciating the causes of the revolution. What follows seeks to describe and analyze some situational causes which allow the possibility for direct causes, both intentional and unintentional to occur and hopefully will bring the complexity of the causes of this famous revolution to a level of simplicity that is comprehensive for any keen student of history. The February Revolution in fact, happened unexpectedly; it did manage to shock the Bolsheviks and Lenin who was still in exile in Switzerland as historian W.H. ...read more.

Furthermore, the urban workers were oppressed by their owners with very low wages, terrible working and conditions. That combined with the shortage of food made them stood up for themselves against the government who failed to keep their citizens full and happy which is an intentional direct cause of the revolution. Not to mention that Marxism and Socialism are well-appreciated in Russia thanks to the industrialization process. Marxism and Socialism boosted the confidence of the workers and also enlightened their path which made the workers insisted on an end to social class divisions and an end to an autocratic, repressive government. Again, this is a direct cause, intentionally aimed at taking the Tsar down. The next day, the demonstrations grew even more and took on a more political nature because the people were now clamoring for an end to the war and an end to the Tsarist regime. People from all classes united together, gained momentum with some support from the Bolsheviks. As clarified previously, the urban workers and the peasants were furious because of the shortage of food and supplies but now everyone became impatience with the Tsar and his incompetent government. ...read more.

First of all, he refused to let the "Progressive Bloc" to run the government, opted for autocracy and instead, let Tsarina and the "Holy Man" Rasputin to run the government which soon turned into a disaster and thus even more discredits to the Tsar which unintentionally forced him to abdicate later on. And also it put him on the spot because now the Tsar would be personally blamed for any loss. For a second time, his risky moved unintentionally gave bad consequences. When the Tsar ordered an open-fire on the demonstrators, many soldiers mutinied and stood on the side of the people which was also a consequence of Russia's heavy loss during World War I. The soldiers had lost faith in its supreme commander and now decided to stand against him, intentionally. Even the commanders now did not promise to protect the Tsar because of the military failures coupled with the Tsar putting himself in trouble by commanding the front directly. The Tsar knew he was losing grip over the situation. Over the next few days, the situation was chaotic, and finally on 2nd of March, the Tsar abdicated himself and his son in favor of his brother Michael - who refused, realizing the immense hatred for an absolute monarchy in the people therefore the Romanovs came to an end. ...read more.