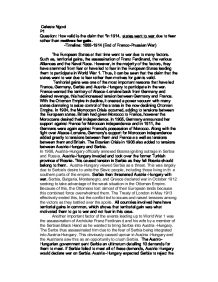 Causes of WW1. How valid is the claim that in 1914, states went to war due to fear rather than motives for gain.

Celeste Ngooi P1 Question: How valid is the claim that "in 1914, states went to war due to fear rather than motives for gain. -Timeline: 1888-1914 (End of Franco-Prussian War) The European States at that time went to war due to many factors. Such as, territorial gains, the assassination of Franz Ferdinand, the various Alliances and the Naval Race. However, in the majority of the factors, they have stemmed from fear or have led to fear in the European States leading them to participate in World War 1. Thus, it can be seen that the claim that the states went to war due to fear rather than motives for gain is valid. Territorial gains was one of the most important reasons that have led France, Germany, Serbia and Austria-Hungary to participate in the war. France wanted the territory of Alsace-Lorraine back from Germany and desired revenge, this had increased tension between Germany and France. With the Ottoman Empire in decline, it created a power vacuum with many states clamoring to seize control of the states in the now declining Ottoman Empire. ...read more.

Another important factor of the events leading up to World War 1 was the assassination of Archduke Franz Ferdinand and his wife by a member of the Serbian Black Hand as he wanted to bring Serbia into Austria-Hungary. The Serbs thus assassinated him due to the fear of Serbia being integrated into Austria-Hungary. This obviously caused uproar in Austria-Hungary and the Austrians saw this as an opportunity to crush Serbia. The Austro-Hungarian government sent Serbia an ultimatum detailing 10 demands for them to meet. If Serbia failed to meet all of these demands, Austria Hungary would declare war on Serbia. Austria-Hungary expected Serbia to reject the ultimatum, which would give Austria-Hungary an excuse to invade. However, the Serb government did not reject the ultimatum. Instead the Serbian government agreed to everything except part of demand 6, Austria-Hungary at this point wanted any reason to attack Serbia and saw this as one and thus declared war on Serbia. Therefore, this factor was as a result of fear and played an important role in the beginning of World War 1. ...read more.

Britain also responded to this threat to their naval supremacy by allying with Japan and forming an entente with France. Which increased tensions between Britain and Germany. The Germans soon followed suit by introducing their own battleships. However, the reason for Britain wanting to weaken Germany's power was motivated by fear. Britain was fearful of Germany's rapidly expanding fleet and military power. They then ordered the construction of more battleships which again increased tensions between Britain and Germany. As said before, with the introduction of the 'Deadnought' a battleship that rendered others obsolete, it nullified their historical advantage which resulted in a 'naval scare' in Britain. Britain's willingness to go to war owed a lot to the tensions and fear caused by the naval race. This indicates that the reason for the naval race and in turn B's participation in the war was motivated by fear. As seen through some of the various factors leading up to World War 1, the major motivator for the majority of the States to go to war was largely due to fear stemming from tensions between the various European states rather than motives for gain. ...read more.