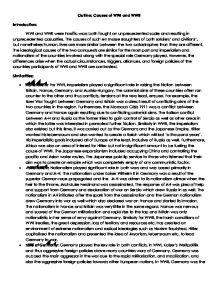 Causes of WWI and WWII

Outline: Causes of WWI and WWII Introduction: WWI and WWII were horrific wars both fought on unprecedented scale and resulting in unprecedented casualties. The causes of such en masse slaughters of both soldiers' and civilians', but nonetheless human, lives are more similar between the two catastrophes than they are different. The ideological causes of the two conquests are similar for the most part and imperialism and nationalism of the countries involved along with the special role Germany played. However, the differences arise when the actual circumstances, triggers, alliances, and foreign policies of the countries participants of WWI and WWII are contrasted. Similarities: * Imperialism: For WWI, imperialism played a significant role in raising the friction between Britain, France, Germany, and Austria-Hungary. The colonial aims of these countries often ran counter to the other and thus conflicts, tensions at the very least, ensued. For example, the Boer War fought between Germany and Britain was a direct result of conflicting aims of the two countries in the region. Furthermore, the Morocco Crisis 1911 was a conflict between Germany and France again resulting due to conflicting colonial aims. ...read more.

The response of AH was plea of help and support from Germany and declaration of war on Serbia which drew Russia in as well. The nationalism in AH initiated after the spark from the assassination and the German nationalism drew Germany into war as well which also declared war on France and started its invasion. The nationalism in France and Britain was very little in the same regard. France was nervous and scared of the German militarization and rapid rise to the top and Britain was only nationalistic in her sense of envy against Germany. Similarly for WWII, the harsh conditions of WWI treaties, the great depression, loss of territory and resources etc. has created an environment of extreme nationalism and radical ideologies such as Nazism flourished. Hitler capitalized the nationalism and presented the idea of Aryanism, lebensraum etc. to lead Germany to war. * Role of Germany: Germany played the key role in both conflicts. In WWI, Kaiser's Weltpolitik and thus aggressive foreign policies drove many countries wary of Germany. Germany was dubbed the main aggressor in the war due to the rapid militarization, and mobilization, and also the aggressive foreign policies towards other European nations. ...read more.

However, in WWI, the technology was relatively less significant due to insufficient development. In WWII, the technology was extremely significant and military advances gave massive and sometimes key advantages over the respective enemies. The arms race also was a factor only in WWI as it raised the friction between Germany and Britain in their struggle to outdo each other. In WWII, the technology and arms were already in development and/or complete. * Mobilization: was critical in WWI as the common belief held that the country to mobilize quickest would win the war. It is this fact that led to rapid mobilization of all countries once a country had actually mobilized. In WWII, mobilization was not important due to efficient and speedy modes of transportation between the countries. * Post-WWI treaties: these of course only concern with the WWII. The treaties were extremely harsh on Germany and stripped Germany of her territory and gave her resources to other nations. Furthermore, the guilt clause in the treaty raised extreme hatred of the west and extreme nationalism thereby promoting the radical ideologies of groups such those of Hitler. * Great Depression: this economic catastrophe led to heightened promotion of the WWI. ...read more.