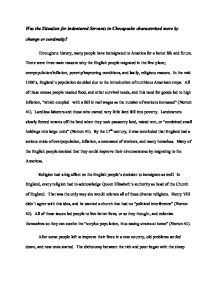 Change or continuity in the Chesapeake

Was the Situation for indentured Servants in Chesapeake characterized more by change or continuity? Throughout history, many people have immigrated to America for a better life and future. There were three main reasons why the English people migrated in the first place; overpopulation/inflation, poverty/improving conditions, and lastly, religious reasons. In the mid 1500's, England's population doubled due to the introduction of nutritious American crops. All of these excess people needed food, and other survival needs, and this need for goods led to high inflation, "which coupled with a fall in real wages as the number of workers increased" (Norton 41). Landless laborers and those who owned very little land fell into poverty. Landowners slowly forced tenants off the land when they took peasantry land, raised rent, or "combined small holdings into large units" (Norton 41). By the 17th century, it was concluded that England had a serious crisis of overpopulation, inflation, a command of workers, and many homeless. ...read more.

These people were sent off to the Americas in small ships, in which many people died before reaching their destination. Power was measured by how much land and servants a person had in America. In order to have prosperous farming, these people needed slaves to help out with the work. That is when the indentured servants came in. Some people thought life in the Americas would be better than the lives they had in England. These people, also known as indentured servants, sold themselves in order to come to the Americas. Farmers paid off their voyage in return for the servants work for the next four to seven years. Farmers believed that "good management would make the process [tobacco farming] self-perpetuating" (Norton 46B). These indentured servants took up 75-85 percent of the population. However, these "immigrants" lived miserable lives. They worked 6 days out of the week, for ten to fourteen hours a day in a temperature slightly warmer than that of England (Norton 47). ...read more.

Around 40 percent of the male servants did not survive long enough to become freed men (Norton 47). Those that didn't suffer any chronicle illness would live successful lives, in which they can even assume position in political prominence. Some indentured servants fought against their masters in court if they were being inhumane. In some cases, the servants won and were moved to another master. However, in the late 1600's Maryland dropped the legal requirement that the servants earn any land, making the freed servants live for years as wage laborers or tenant farmers (Norton 47). Change and continuity are big factors in the lives of the indentured servants. Change does occur but not enough to make a big difference in many of the indentured servant's lives. The chances of actually being prosperous were very slim. They still continued to be low class, and hard working people. Overall, continuity plays a bigger role in the lives of these poor servants, who just needed the money to "better" their lives in their near future. Word Count- 893 ...read more.