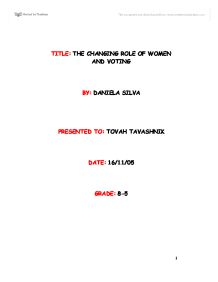 TITLE: THE CHANGING ROLE OF WOMEN AND VOTING BY: DANIELA SILVA PRESENTED TO: TOVAH TAVASHNIK DATE: 16/11/05 GRADE: 8-5 TABLE ON CONTENTS INTRODUCTION 3 20 QUESTIONS 3 ANSWERS 4,5,6,7,8 CONCLUSION 9 PICTURES 9 BIBLIOGRAPHY 10 FACT SHEET 11 Introduction Since the beginning of time women have been classified as a specie that could not do the same works as men did. This was only because of the fact that we were women and that man thought that the only way in which we could help was in the kitchen, by having babies or by serving and pleasing the men. But in the First World War, although many men died and many innocent people suffered, it was the time in which women demonstrate that they had more abilities than men could thought they had, and that women had to have the same rights as men did. In the First World War and after this war, women started to reveal themselves an thought things that they had never thought before. The women lost the fear to talk and to express themselves. Although they were not heard they invented many ways to be heard and to finally achieve many things they wanted. The First World War gave a complete turn to women's life and it was from then on, that many men changed their point of view toward women. Questions 1-Did the war change the role of women? 2-What where the things that changed during the war? 3-What was the role of women before the war? 4-Why did women get the vote in 1918? 5-Which ways were invented by women to be heard? 6-Who were the suffragists? ...read more.

1- Book title: The changing role of women pg 62 2- Book title: The changing role of women pg 63 9- Emmeline Pankhurst was born in Manchester in 1858. She was the creator of the WSPU (women's social and political union) and the leader of this organization. She was really different from Millicent Fawcett. She was a violent person which wanted to achieve her goals in a disorganized, disrespectful and self-conscious manner. Her controversial campaigns won immense publicity for the women's suffrage movement. But it came to a moment that all this things she wanted to achieve, went out of control, making the women from the WSPU, including her got to jail. 10- When war was declared, the suffragists decided to stop all political activities until the war was over. But the suffragettes did not and wanted to gain more power. So they started to negotiate with the British government and later the suffragettes' newspaper was called the Britannia. Before this, the suffragettes went out of control because they organized windows smashing across the whole of central London soy they all went to prison. Then when they negotiate with the British government every suffragette came out of prison and it was then when the newspaper got its name. In the newspaper appear things such as ""For Men Must Fight and Women Must work'' and ''Let None Be Kaiser's Cat's Paws''(3). 11- When the suffragettes went to prison they went on a hunger-strike. This time instead of making them eat, when the women became really ill and close to death they were release. ...read more.

"9 June Grandstand at Hurst park racecourses in Surrey set on fire." "18 June Church in Rowley Regis set on fire." "30 June Railway station at Leuchars junction set on fire." (6) As you can see the suffragettes turned very violent indeed. They started to do horrible things only because they wanted to achieve something which they could achieve without using the violent methods they were using. 5-http://news.bbc.co.uk/1/hi/uk_politics/a-z_of_parliament/t-z/85015.stm 6-Book title: The changing role of women pg 65 CONCLUSION In conclusion we can say that women had been classified in a horrible way before the First World War. After this war many things started to change and it was then when women had the attitude and the strength to express what they really felt and to many things they had not done before. The women won the vote because of all the effort they made and the positive attitude they had. Although there were some campaigns which tried to contribute but instead did really bad things which made the government change their mind about giving the vote, it was more the things that were made in a good way that the thing they made wrong. I absolutely think that if it the First World War had not happened the women would be restricted to a social life or it would not be as free as we are now. This war gave a new chapter in history in which men finally understood that women had an amazing intelligence, braveness and a lot of attitude to do new things and it was from then on that women were taken more seriously with a better attitude and with more respect as before. This was the time in which women showed who they really were. ...read more.