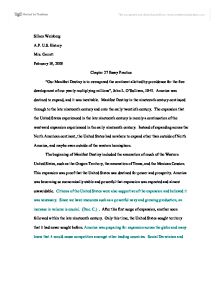 Silken Weinberg A.P. U.S. History Mrs. Garrett February 19, 2009 Chapter 27 Essay Practice "Our Manifest Destiny is to overspread the continent allotted by providence for the free development of our yearly multiplying millions", John L. O'Sullivan, 1845. America was destined to expand, and it was inevitable. Manifest Destiny in the nineteenth century continued through to the late nineteenth century and onto the early twentieth century. The expansion that the United States experienced in the late nineteenth century is merely a continuation of the westward expansion experienced in the early nineteenth century. Instead of expanding across the North American continent, the United States had nowhere to expand other than outside of North America, and maybe even outside of the western hemisphere. ...read more.

Social Darwinism and the ultimate "Survivor of the Fittest" would soon occur. (Doc. B) Purposes and mentality were also different between the two different periods of expansion. American began to abandon its isolationist policies and was inspired by imperialism during the later nineteenth century. This time, the need for expansion was of course for raw materials, a better world market and a better economy, but also for humanitarian and religious reasons. Many believed that they were God's chosen people, and it was their responsibility to protect and conquer the world - they were truly carrying "the white man's burden" (a novel by Rudyard Kipling). (Doc. E.) Theodore Roosevelt believed that it was America's duty to protect it's neighboring countries. It was not greed that America possessed but selflessness and concern for other nations. ...read more.

China was a country with several spheres of influence, not including the United States. Although due to John Hay's "Open Door Policies", America assumed free trading rights with China, all for the efforts of protecting China's culture and territory. The United States was secretly becoming the controller and master manipulator of the world market. (Doc. G) Imperialism was spreading and all countries fought to possess as much land as they could obtain. William Shakespeare's quote, "Why, then the world's mine oyster, Which I with sword will open" seems to summarize the mentalities and goals of the world's leading nations during the period of later expansion in the late nineteenth century. The world was God's gift to its children, and America put on the role of God's chosen people, the world was given to them and they had the responsibility to conquer it and protect it. ?? ?? ?? ?? ...read more.