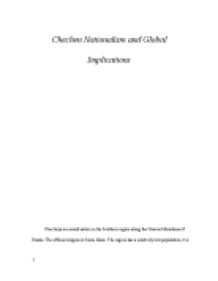 ﻿Chechen Nationalism and Global Implications Chechnya is a small nation in the Southern region along the Caucus Mountains of Russia. The official religion is Sunni Islam. The region has a relatively low population; it is approximately 1.3 million. The official language of the region is Chechen (some argue that is Russian). The capital of the nation is Grozny and the Republic of Chechnya was ?officially? established in 1991 (BBC). Throughout the years Chechnya has gone through dynamic changes. The dynamic changes that have created and are creating self-determination in Chechnya have followed the nationalist paradigm for state development, and through this several global themes have been incorporated: the rise of the global economic system, the rise of Islam, the fall of Communism, and the world has seen the methods of 21st century imperialism. Chechnya followed the J-Brown paradigm for national development. The revolution model does not fit the series of events as well. The revolution model discounts the unification process, and the revolution model discounts the importance of the identifiable people group. A revolution occurs when the people overthrow the government and they create a new government. Nationalism occurs when the identifiable people group revolts and breaks away from a parent country or nation. Nationalism is the creation of immense national pride, and through this creates political change. A revolution is simply political change that occurs because of a lack of solid rule, and an infuriated middle class. ...read more.

The people of the world need to let Chechnya take care of the Chechen problems without international or foreign aid. Cultural nationalism has been one of the most important factors in Chechnya. The people of Chechnya have not been very united in the past. The people needed a common culture to unite them. This resulted in Islam being very important to the Chechen case for independence. Islam unified the people; this allowed them to fight the Russians effectively, and this new unity made internal conflict between the Chechens harder and more unlikely. The 1990s was a period of time where the identification of Chechnya with Islam become increasing important, and the growing link between the two philosophies was becoming more and more apparent (Gewertz). The period between the Chechen Russia wars was a key period in the rise of Islam as a political ideology. Chechnya and Islam were becoming closer and closer (Gewertz). Finally In 1999 Shar?ia law (traditional Islamic law, based off of the hadiths and Koran) was imposed (BBC). This was very important, because it created a situation were the culture of Chechnya and the government of Chechnya were hard to separate. In 2002 Bin Khattab (a prominent Islamic politician in Chechnya) and Osama bin Laden were seen talking about the ?war on the west?. This showed to the world the creation of a neo middle east in Chechnya. ...read more.

Both of these leaders fought in the name of Islam, they put a religion behind them, and then many people followed, because they felt that the violence and thee killings were justified in the name of Islam. The global fall of Communism was a very important factor in the Chechen revolution. The fall of Communism in the Soviet Union was very important; had the USR not split apart then Chechnya would not have been able to declare independence in 1991. It is much easier for the people of Chechnya to revolt against Russia then it would have been against a bigger more powerful USR. The new global age of imperialism is another global theme that is present in Chechnya. The Russians are acting like colonial Europe in the 19th century. They are exploiting a region for its natural resources. However, They are maintaining control using 21st century methods. They are using new war techniques once the USR broke apart; Russia took control of the nuclear weapons. These weapons are very important in intimidating the Chechens. The Chechens did not get access to the Weapons of Mass Destruction; a nuclear confrontation with Russia would very likely be one sided and it would result in the annihilation of Chechnya. This fear has helped subdue Chechen nationalism. The Russians are also economically exploiting Chechnya more then they are politically controlling it. This shows us that in the modern day and age people care less about hard power but more about money. ...read more.